A former Builder of the Year who appeared on Channel 4’s Love It Or List It has been accused of downing tools midway through a £77,000 home extension job.

Terry Bodley, 74, was hired by Adam Lewis to carry out the extension at his home in Billesley, Birmingham.

Mr Lewis, 46, lives in the three-bedroom semi with his wife Maria and two daughters, Erin, 10, and eight-year-old Connie.

But the self-employed barber now rues the day he paid nearly £80,000 for a catalogue of unfinished work, including a loft conversion and rear extension. 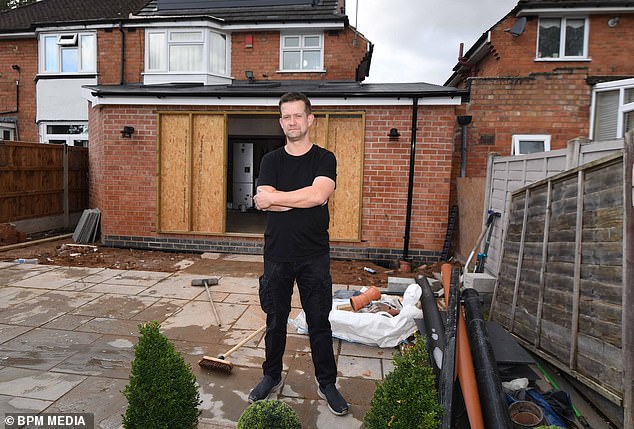 Terry Bodley, 74, was hired by Adam Lewis, 46, (pictured) to carry out the extension at his home in Billesley, Birmingham 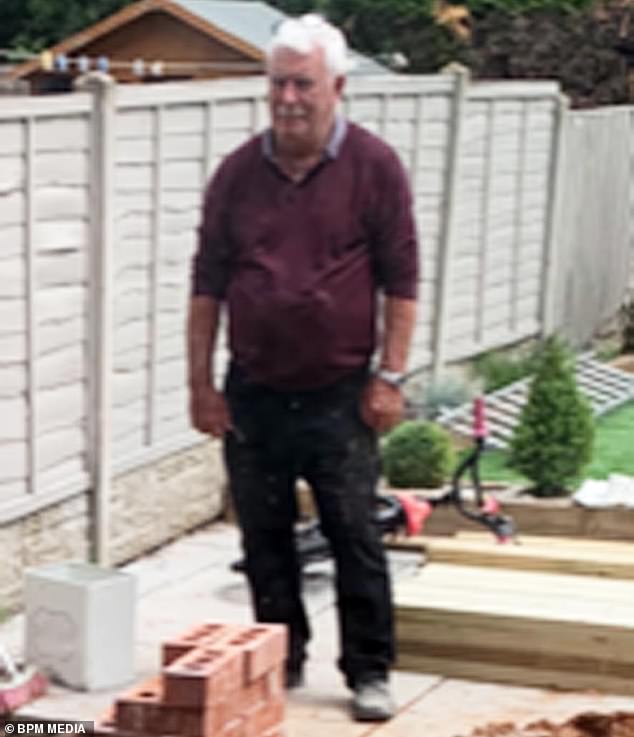 Mr Lewis claims former 2006’S Builder of the Year Mr Bodley (pictured), who appeared on Channel 4’s Love It Or List, walked out on the job

He alleges the 74-year-old simply downed tools and walked out with the job nowhere near complete.

Mr Lewis said: ‘I am angry because there is no contrition or apology. If he’d just say he’s sorry.

‘When my wife confronted him, he said a lot of work had been done and we’d been quoted a lot more by other builders.

‘I feel that’s a damn cheek – we entered into a contract. My wife has been left in tears.

‘Connie, who is a lovely kid but has complex problems – it’s a daily struggle, has been affected by the upheaval, so has Erin. I’ve lost sleep. 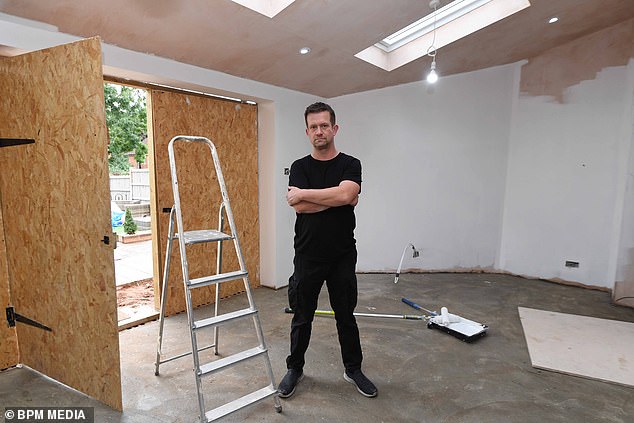 Self-employed barber Mr Lewis rues the day he paid nearly £80,000 for a catalogue of unfinished work, including a loft conversion and rear extension

‘I’ve been too trusting, but I didn’t see a problem. I’ve told him, “you’ve broken our hearts, Terry – we trusted you, we liked you”.’

He likened his home of 11-years to a building site, complete with overflowing skip and leaky, unfinished roof.

In text message exchanges, Mr Bodley blamed the pandemic for cranking up prices and pledged to pay back what he owes.

Mr Bodley, from Birmingham, said he is willing to return to complete the work when cash-flow problems ease, adding the extension is almost done.

And the pensioner stressed he had gone ‘above and beyond’ by carrying out extra jobs. 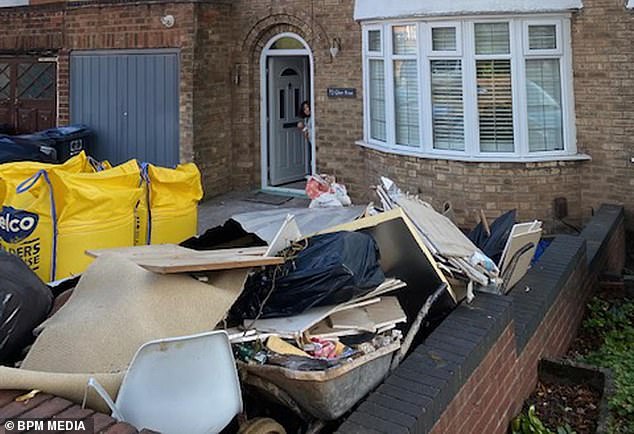 Mr Lewis likens his home of 11-years to a building site, complete with overflowing skip (pictured) and leaky, unfinished roof 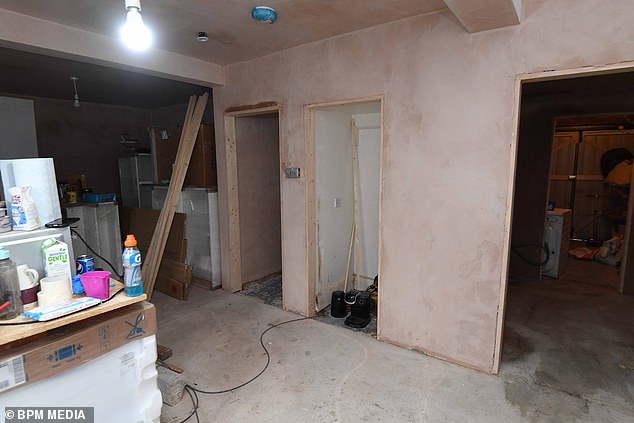 In text message exchanges, Mr Bodley blamed the pandemic for cranking up prices and pledged to pay back what he owes

Of that, £4,000 has already been handed over to another tradesperson.

Mr Lewis stressed there were no issues when Mr Bodley began the work on May 22, supported by a bricklayer, carpenter, plasterer and labourer.

By the end, he was the only person on the site and abandoned the job a month ago, Mr Lewis claims.

‘To start with it was fantastic,’ said Mr Lewis. 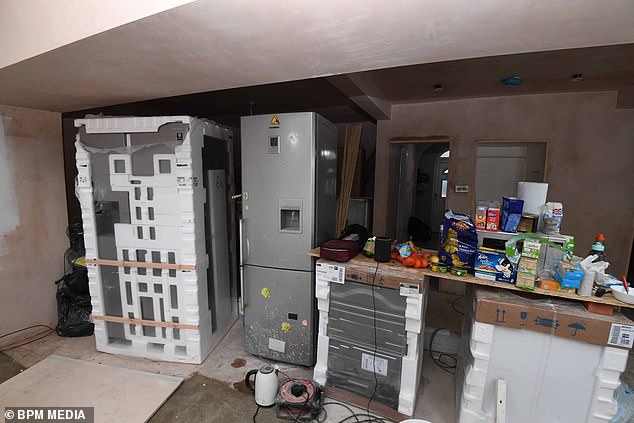 ‘I couldn’t praise him enough. He clearly knew his stuff. They were a nice bunch of lads, turned up every day on time and Terry oversaw everything brilliantly – and he ensured all the materials turned up as and when required.

‘Then, about two months ago, everything went alarmingly wrong. Terry wanted more money and he wouldn’t discuss where all the money had gone.

‘I knew something wasn’t right. The final straw was when he asked for another £1,000. That’s when I knew we were in big trouble.’

Bank statements that show the thousands of pounds transferred to Terry’s account and a stream of text messages show Mr Lewis becoming increasingly exasperated with the builder.

In one, dated August 12, Mr Bodley asked: ‘We’re getting close to finishing the kitchen. Can you please let me have £1,000 so we can finish the utility in the garage and also pay for the fire door, thank you?’ 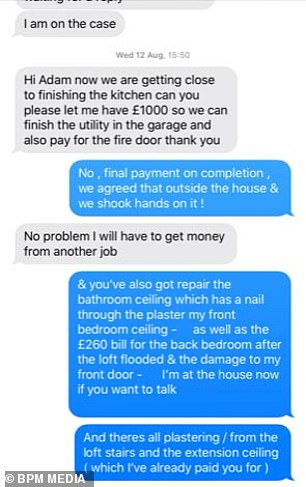 Mr Lewis wrote: ‘No, final payment on completion. We agreed that outside the house and shook hands on it.

‘You’ve also got to repair the bathroom ceiling which has a nail through the plaster, my front bedroom ceiling as well as the £260 bill for the back bedroom after the loft flooded and the damage to my front door.

‘And there’s all the plastering from the loft stairs and the extension ceiling, which I’ve already paid you for.’

Mr Bodley wrote: ‘No problem. I will have to get the money from another job.’

A month ago, the beleaguered builder explained his predicament by text: ‘When I first quoted your job there was no virus about.

‘Since then, all materials have gone up because of short supply. Plaster £6 a bag, now £15 a bag – and that’s if you can get it.

‘Timber all gone up. I have covered the cost as I went along.’

He received short shrift from his customer.

‘But a written price is a written price. If you’ve under-priced it’s not mine or Maria’s responsibility. The virus was on in May as I didn’t return to work until July 4.’

A message sent last Sunday by Mr Bodley outlined personal problems he had endured and pledged: ‘As soon as I get the funds I will pay you off, hopefully next week.

‘Will keep in touch.’ 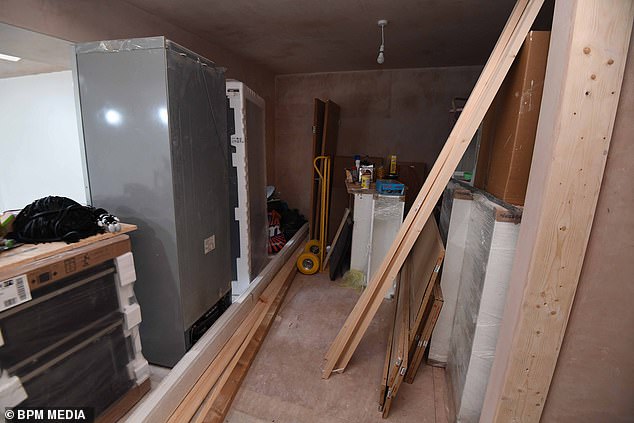 Mr Lewis stressed there were no issues when Mr Bodley began the work on May 22, supported by a bricklayer, carpenter, plasterer and labourer

As yet, no cash has been forthcoming.

Mr Lewis said: ‘In total we’ve been left with over £12,307 of costs that were supposed to be included in our price.

‘Our new extension roof is still incomplete and leaking. We’ve a damaged front door. Plastering has cost us nearly £4,000.

‘The floor which Terry attempted to do went badly wrong – it looks like the surface of the moon. That’s another £2,000.

‘We will get over this, but I’d hate it to happen to anyone else.’ 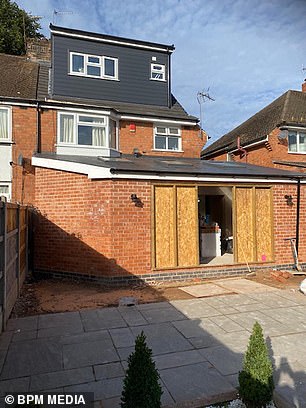 When asked for a response, Mr Bodley , crowned Builder of the Year in 2006, said: ‘There are two sides to every story.’

He is, he stated, a victim of coronavirus on a professional and personal level. His brother died from COVID-19.

Mr Bodley said: ‘We began the job before the coronavirus started. I said to Maria and Adam, “do you mind if we carry on?”.

‘We did carry on and finished the loft conversion. But the materials were going up and going up and it was hard to get them.

‘I never passed on the extra price to Maria and Adam, I took it on the chin. We plodded on and towards the end I told Adam I was running short of money.

‘I asked if it was possible to have some money. He said he didn’t want to give me more money until the job was completed, which I thought was a bit unreasonable. I’m a one-man band.

‘So I told him I’d got another job, I’d do that, take some money from it and come back and finish the work. Adam agreed on that. I said that as soon as I had some money I’d come back.

‘At the beginning, their attitude was fine. They were telling everyone about the loft job and even invited people round to look at it. Then his attitude completely changed at the end – how it became sour, I don’t know.

‘We did the extras they wanted. They wanted a flat roof and I said, “why not have a pitched roof?’. They did.

‘We did all the electrics for the kitchen appliances. He got his own plasterer in, for some reason. Why get someone else in when it’s our contract?’

He added: ‘I’ve been a builder all my life, I have a good reputation. I have never let anyone down. But you’re always going to get one or two because they look on the internet.’ 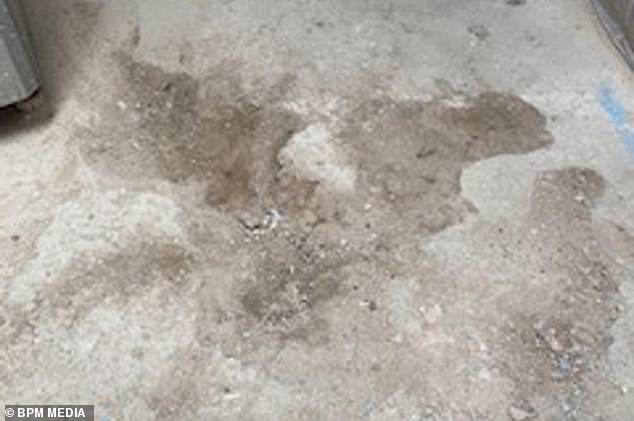 Mr Bodley, from Birmingham, said he is willing to return to complete the work when cash-flow problems ease, adding the extension is almost done. But the roof is leaking causing puddles (pictured)

There are customers who have been extremely happy with the standard of Mr Bodley’s work.

One from ‘Linda’ stated: ‘I was so pleased to have found Terry Bodley Builders as Terry walked me through every aspect of the build I would need to undertake.

Eileen said: ‘Terry Bodley first worked for me 12 years ago when I had a large kitchen extension. He was always on time and the work was excellent.

‘Since then I have always used him for other work. As a lady on my own I feel confident using him to do jobs.’

Air hostess, 27, is jailed for 28 months after turning to cocaine dealing