Stunning images show the wide swaths of Kenosha, Wisconsin, that have been ripped apart and burned to the ground during riots over the police shooting of Jacob Blake.

The city of 100,000 on the shore of Lake Michigan has been roiled by unrest in the week since 29-year-old Blake, a black man, was left paralyzed from the waist down after he was shot multiple times in the back by police officers in front of his children on August 23.

Protests devolving into violence have left countless buildings charred, businesses looted and destroyed, and streets littered with debris as Kenosha emerged as the latest flashpoint in a summer of US demonstrations against police brutality and racism.

The devastation will serve as a backdrop for President Donald Trump when he visits Kenosha on Tuesday to promote the law and order campaign crusade he’s been peddling in the three months since nationwide unrest erupted following the death of George Floyd in Minneapolis. 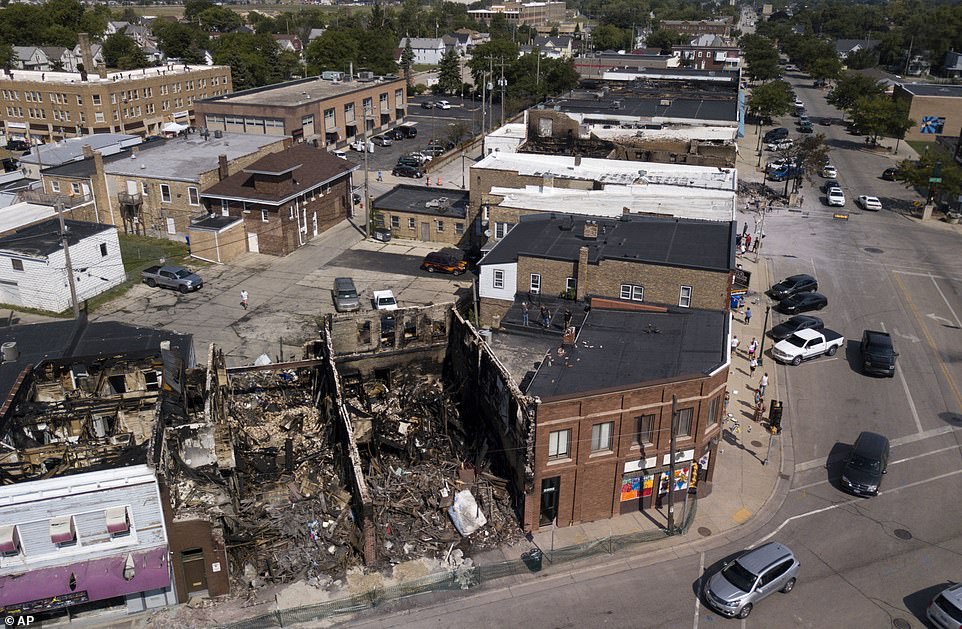 Stunning images show the wide swaths of Kenosha, Wisconsin, that have been ripped apart and burned to the ground during riots over the police shooting of Jacob Blake. The aerial photo above shows damage to several businesses downtown 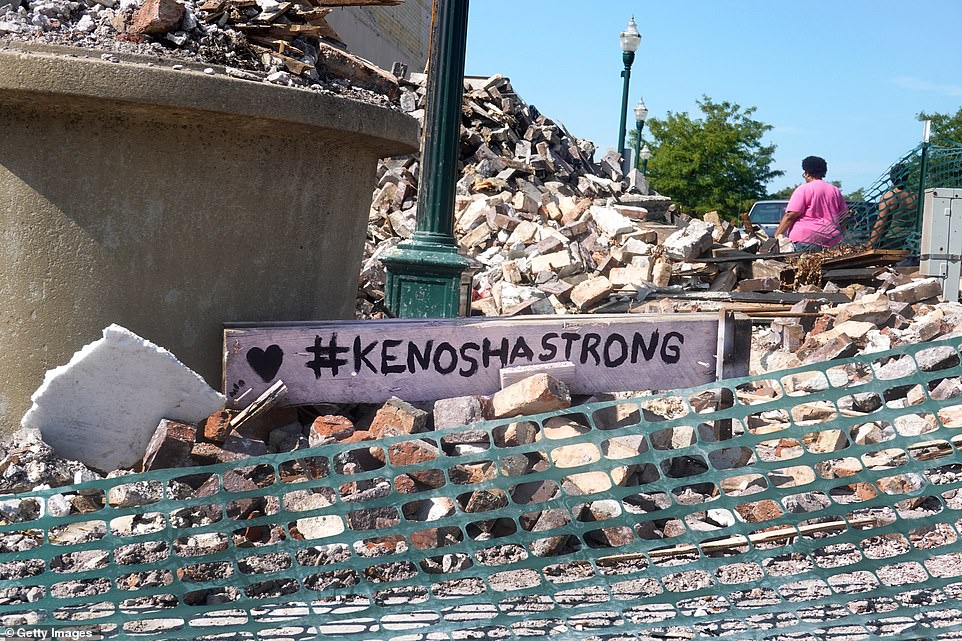 A sign with the phrase ‘#KenoshaStrong’ is seen among the rubble of a building that was burned down during riots that erupted in Kenosha, Wisconsin, following the police shooting of Jacob Blake. The city of 100,000 on the shore of Lake Michigan has been roiled by unrest in the week since 29-year-old Blake, a black man, was left paralyzed from the waist down after he was shot multiple times in the back by police officers in front of his children on August 23 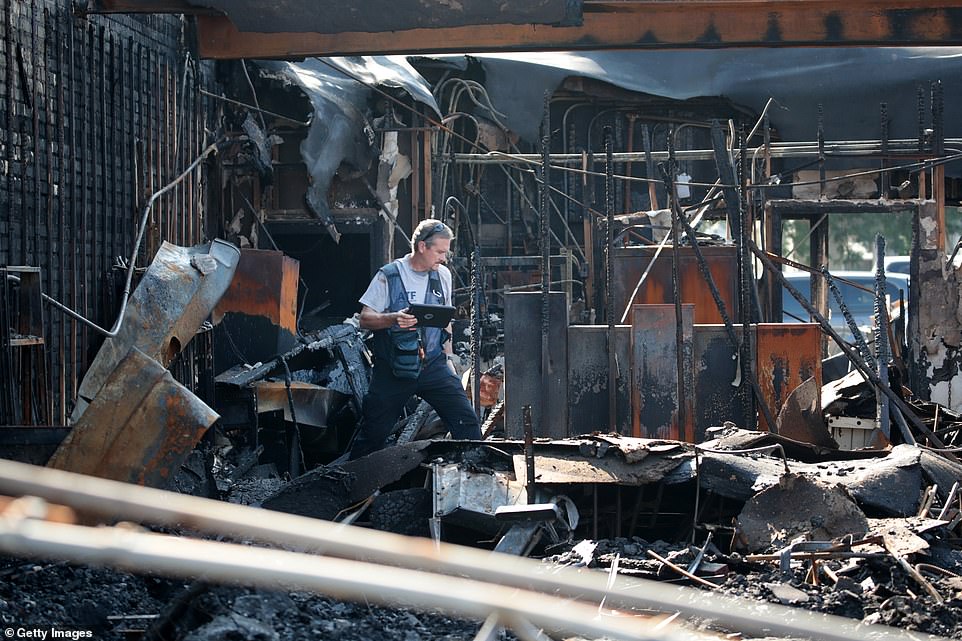 An ATF agent collects evidence in a burned out store that was destroyed during riots on Thursday in Kenosha. Protests devolving into violence have left countless buildings charred, businesses looted and destroyed, and streets littered with debris as Kenosha emerged as the latest flashpoint in a summer of US demonstrations against police brutality and racism 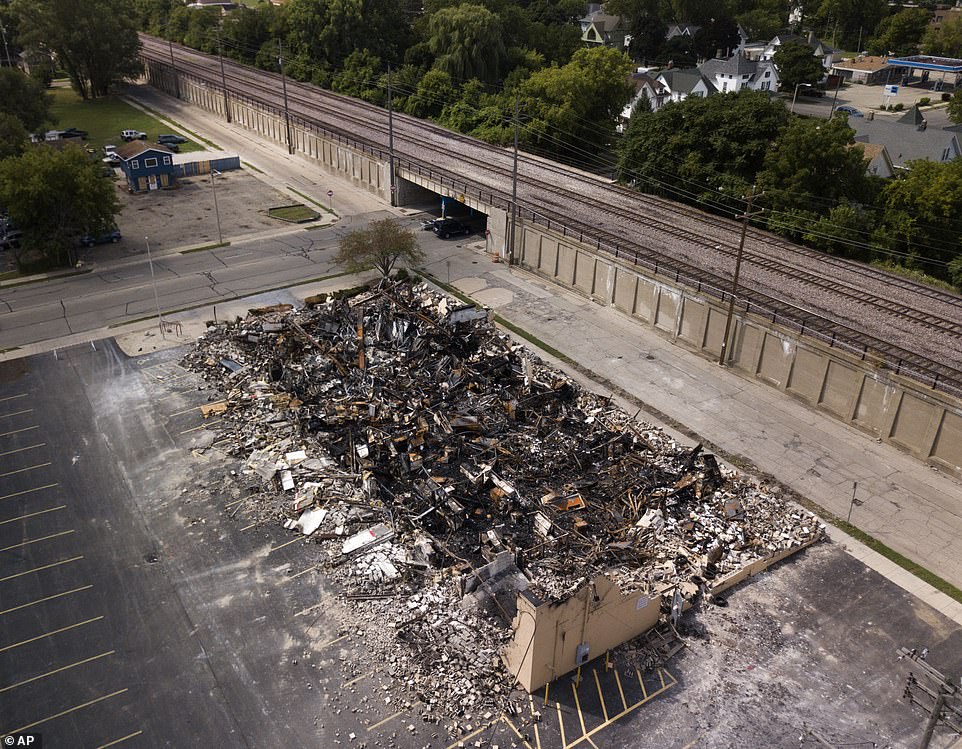 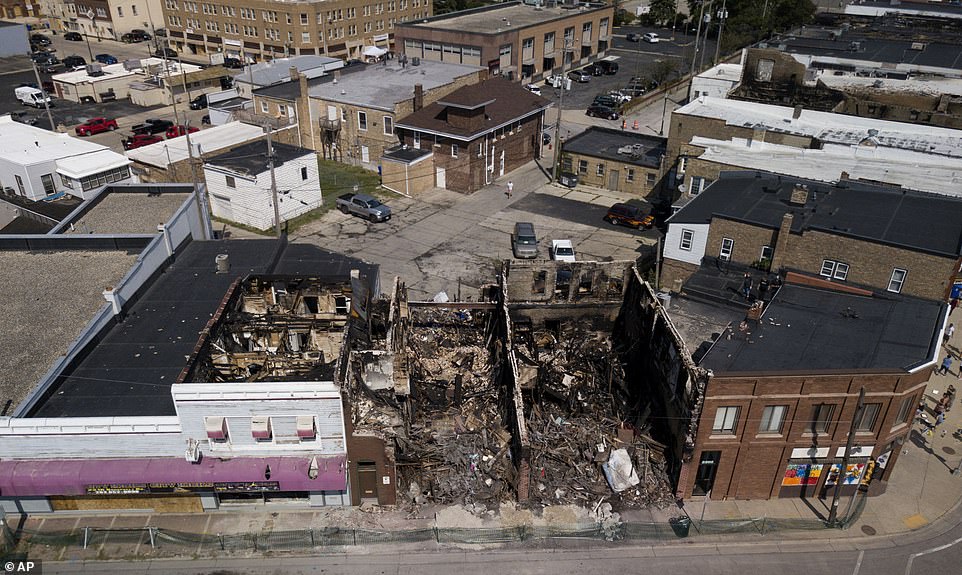 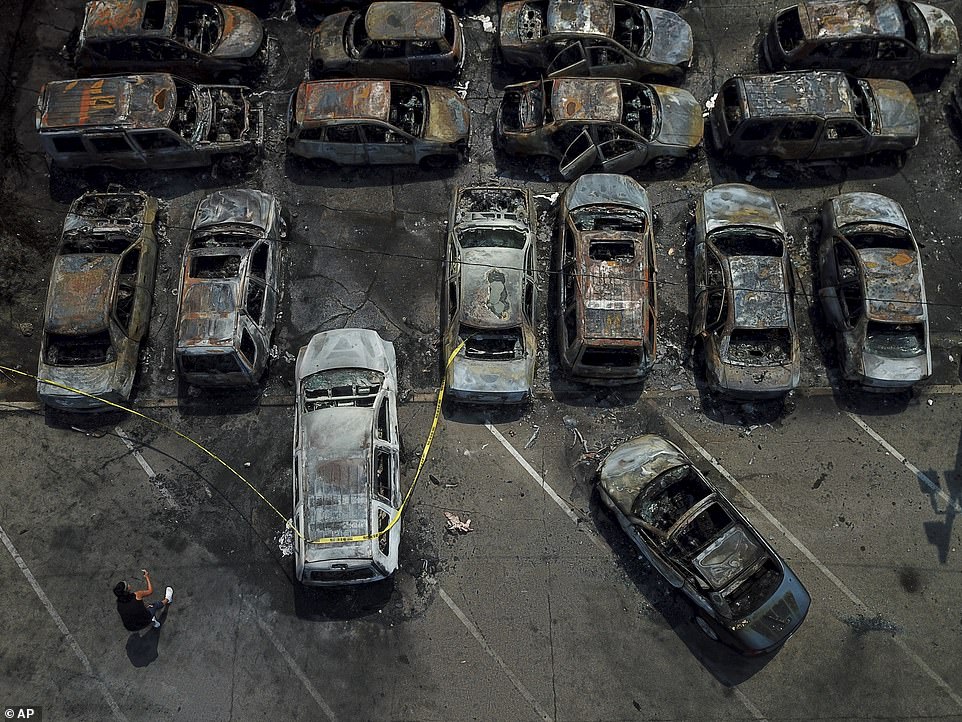 The visit is likely to exacerbate tensions in the city as critics accuse Trump of exploiting the situation to stoke fear and bolster his chances at re-election. 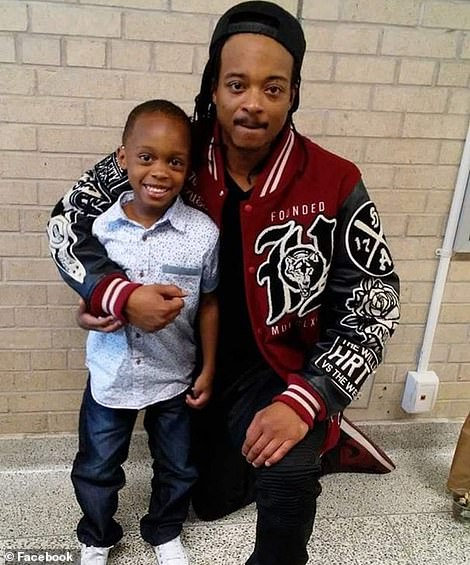 The president is also working to set up a meeting with Blake’s family, who have publicly condemned the violence that’s taken place in response to their son’s death.

Some Kenosha residents who have watched their hometown fall to pieces in recent days are placing blame for the violence on outside agitators descending on the city.

‘In the past week I’ve seen my city burnt to the ground by people who don’t live here,’ Terry Nelson, whose bar Down Town’R Saloon was looted and trashed by rioters, told The Sunday Times.

‘I’ve got nothing against peaceful protest but if I wanted you to be sympathetic to my cause and then I took a baseball bat and broke both your knees, how sympathetic would you be?’

The Times spoke to Nelson on Friday afternoon as he hammered plywood boards on the windows of his saloon that had been smashed by rioters who stormed in, set off fire extinguishers and stole alcohol.

He estimated that about $25,000 in damage had been done to the bar that he and his wife opened in March, right before the coronavirus pandemic hit.

‘Some of the city may never recover,’ Amy Hanson, 37, a third-generation local, told the Times.

‘There’s people that won’t come back from this. Buildings that were here in my grandmother’s time that have been destroyed.’ 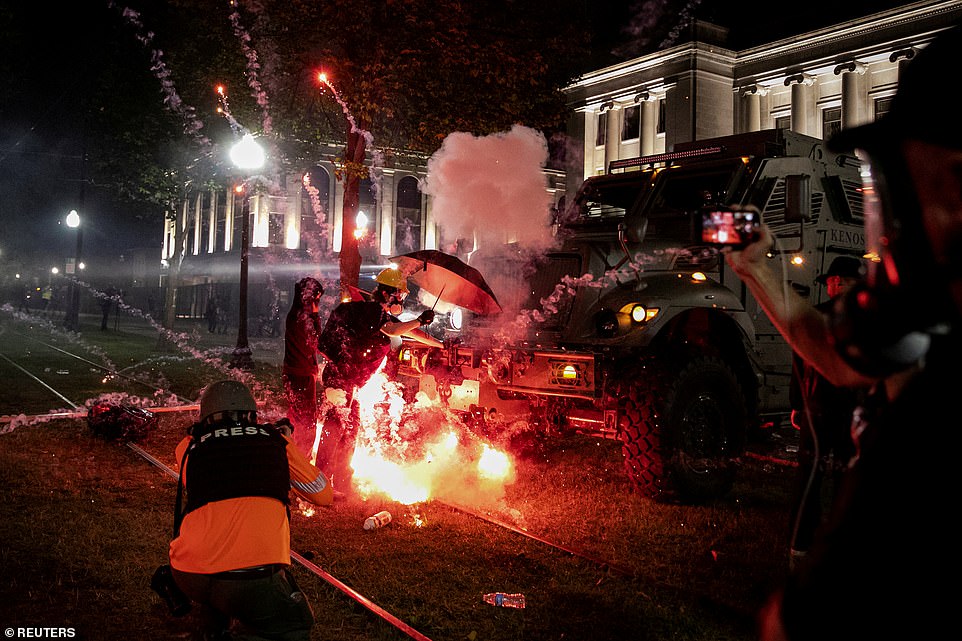 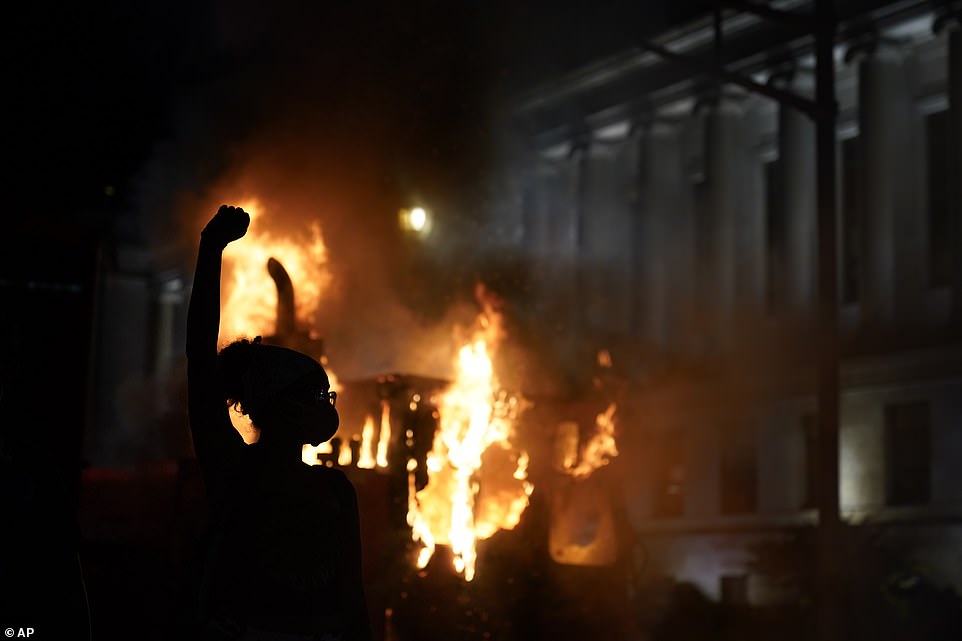 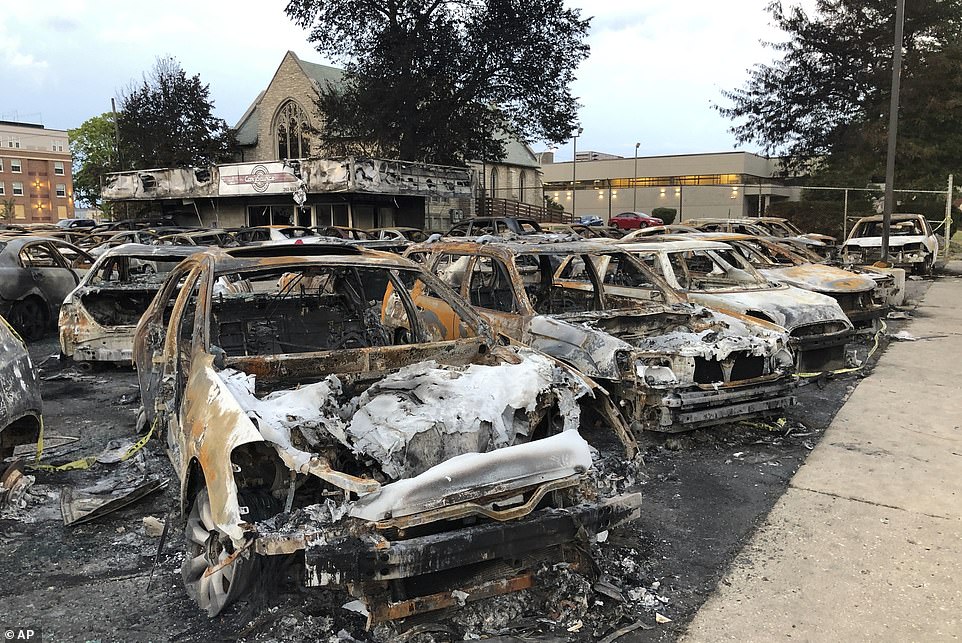 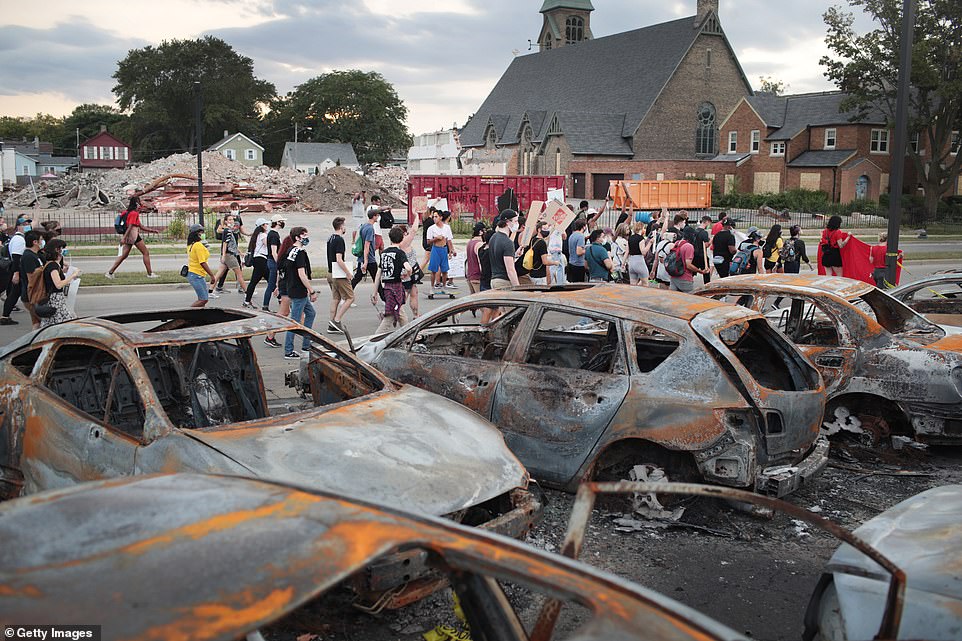 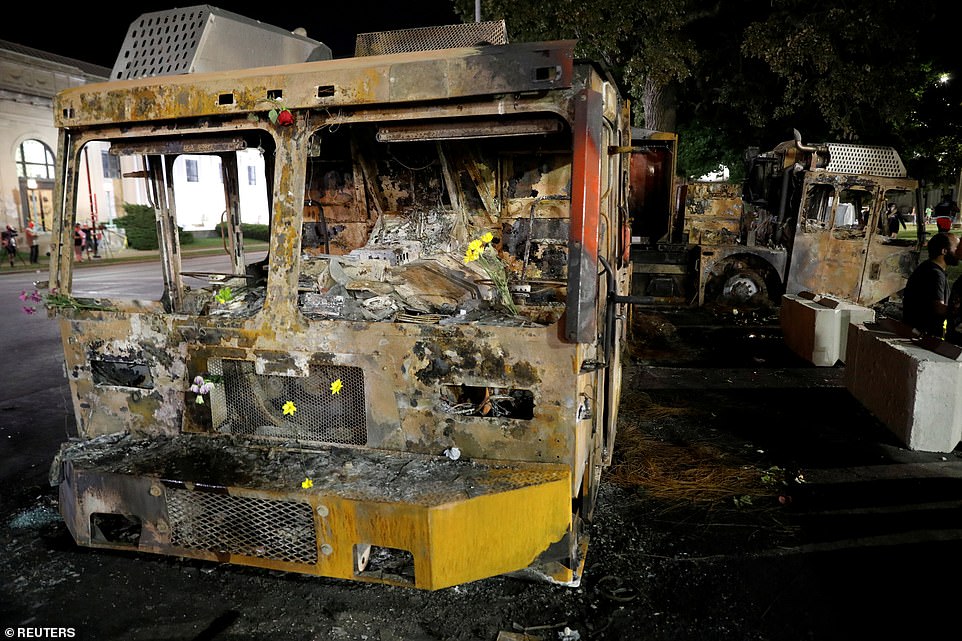 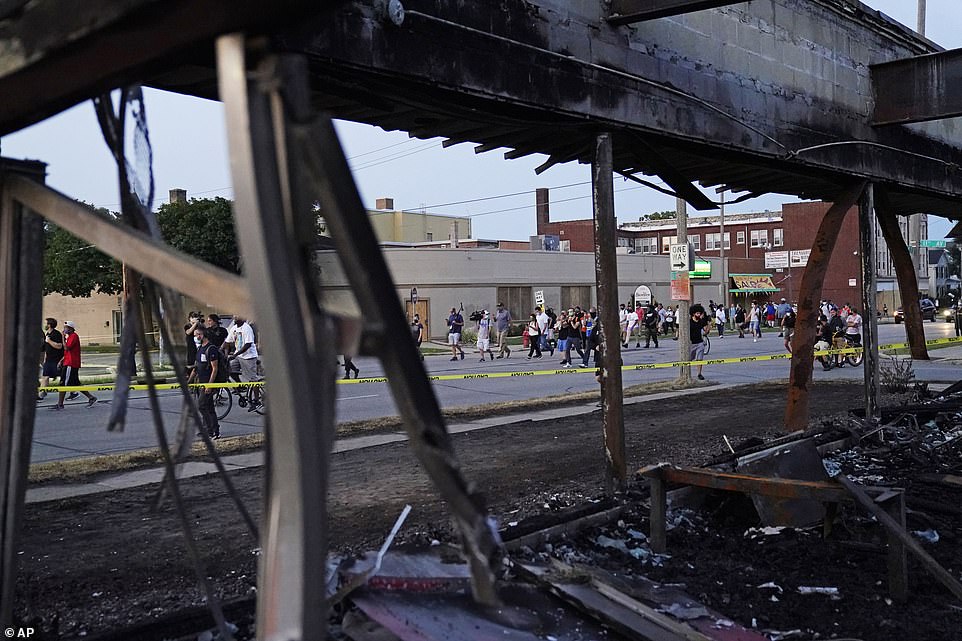 Protesters march past a charred structure in Kenosha on Tuesday

Plywood panels protecting businesses around the heart of Kenosha have been painted with a variety of messages – some expressing hope and solidarity, and others seeking to deter rioters with statements including: ‘Kids live here.’

A man named Banks who lives near where the worst of the violence has unfolded spoke to the Times about how he was pepper-sprayed by police while sitting on his own porch during the unrest.

He echoed Nelson’s suggestion that the violence is driven by outsiders.

‘It’s right that people are out here protesting,’ Banks said. ‘But the people burning shit? Nah. That’s all out-of-towners.

‘It’s a mistake, because they make it about the destruction, not the message. Why would we burn our own shit down? The only store where you can get hair products for black folk, it’s burnt up. Why would we do that to ourselves?’

Vickie Kwasny, a retiree, spoke to the outlet as she surveyed dozens of torched cars in a parking lot near her home.

‘We are not the last community that this will happen to,’ Kwasny said. ‘I hope we can heal. We have a lot of cleaning up to do.’

Nelson said he believes the destruction that’s taken place in Kenosha during the last week could have a large impact on the public’s perception of the Black Lives Matter movement in Wisconsin – a key battleground state in the November election – and around the country.

‘When you wrap yourself in that flag of BLM and you burn cities to the ground, people will remember,’ he said. ‘There’s a quiet majority out there.’ 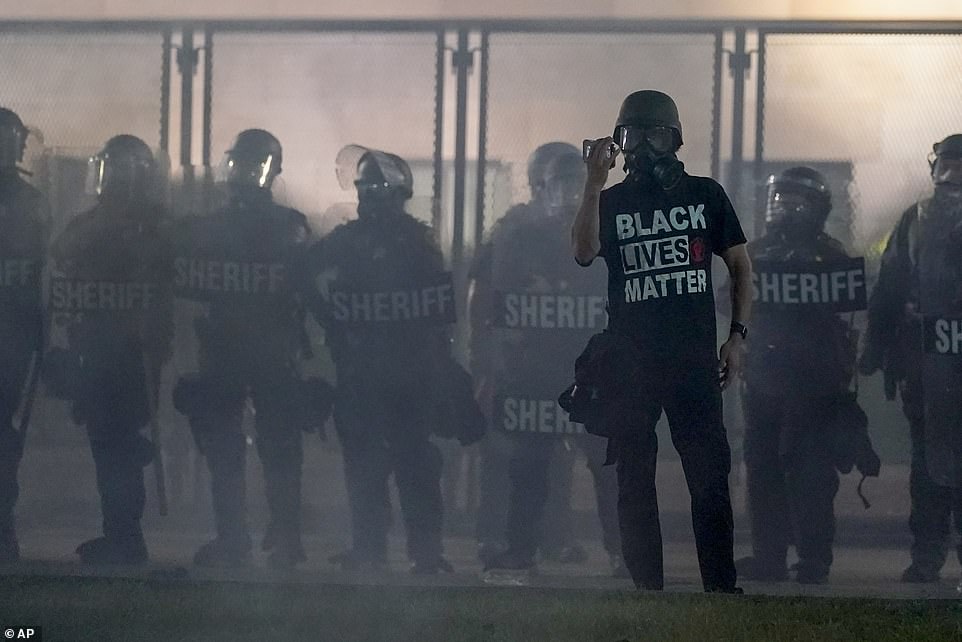 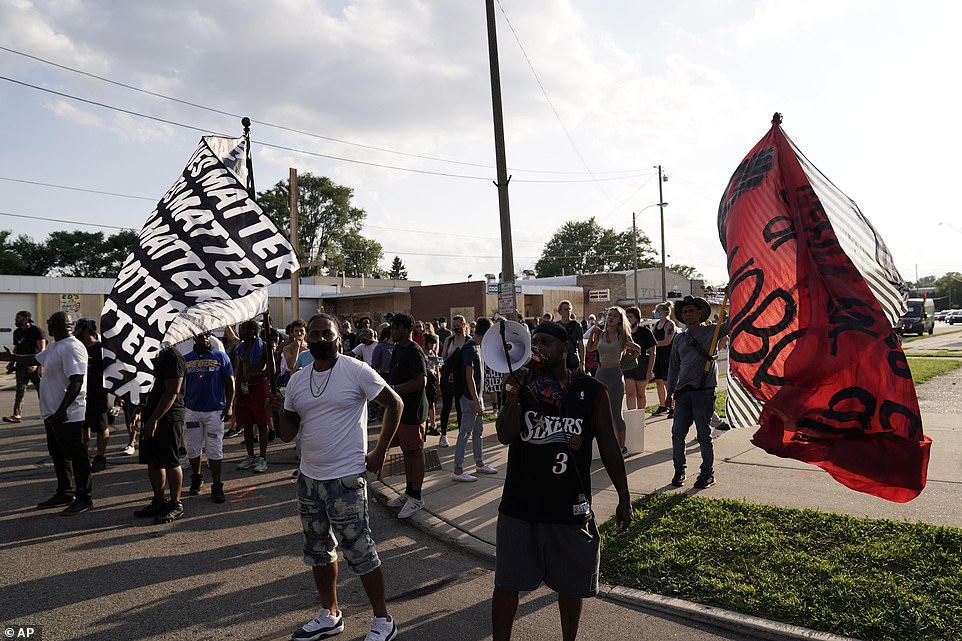 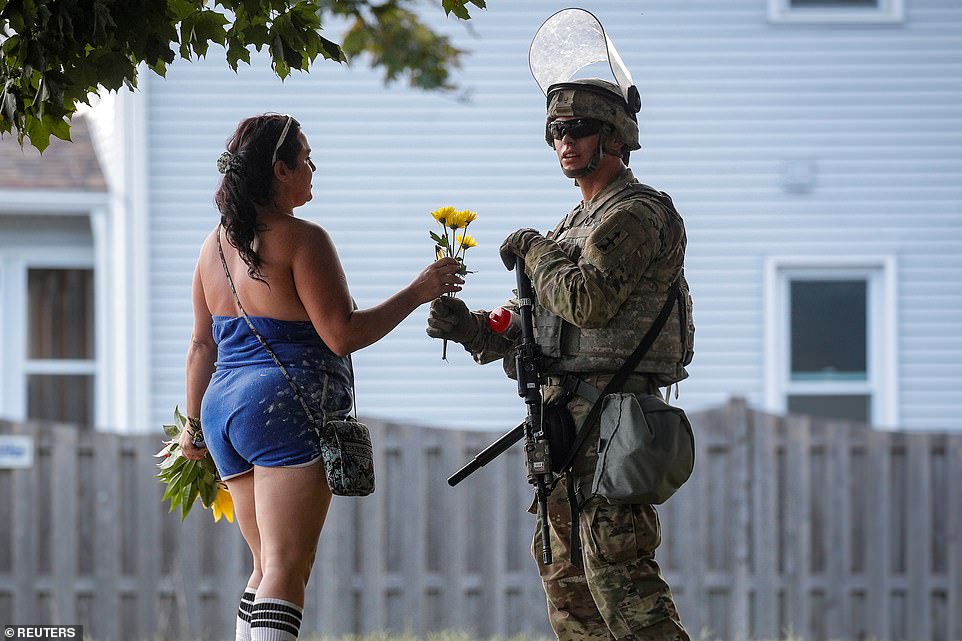 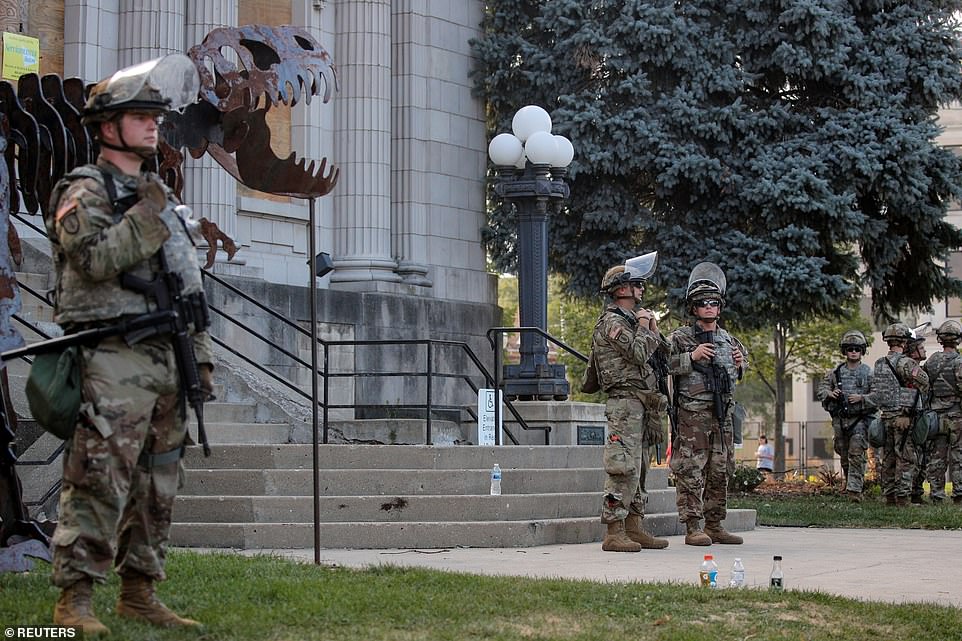 Members of the Wisconsin National Guard stand by as people gather for a vigil, following the police shooting of Jacob Blake 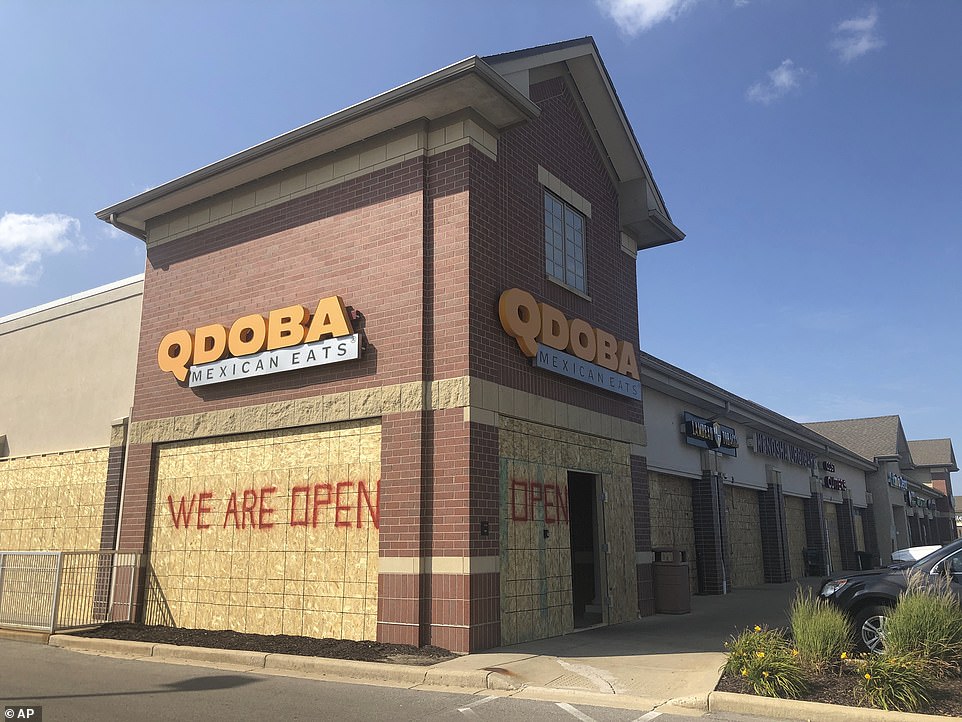 Nelson’s attitude is one that Trump has repeatedly pushed in the face of anti-racism demonstrations this summer.

The president leaned heavily on his law and order message during last week’s Republican National Convention as he accused Democrats of giving ‘free rein to violent anarchists, agitators and criminals who threaten our citizens’.

That message could prove even more effective when its delivered in Kenosha in front of people directly affected by the unrest.

Trump has not commented publicly about the Blake shooting or about another incident two days later, when 17-year-old Kyle Rittenhouse opened fire on a group of protesters with a semi-automatic weapon, killing two people.

On Sunday the president’s daughter-in-law Lara Trump revealed that he is trying to set up a meeting with Blake’s family, after the shooting victim’s father said the president should have called earlier this week and mother says she missed his call. 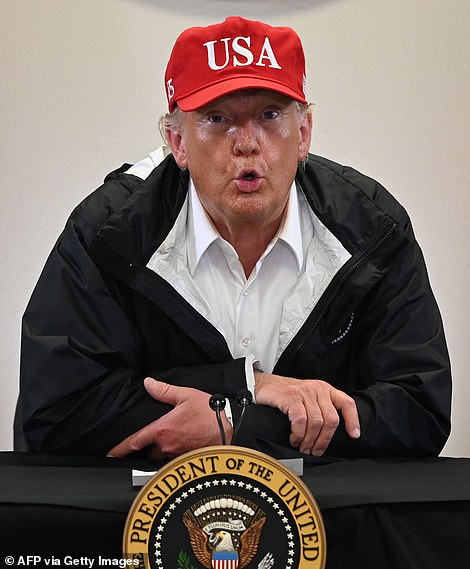 Trump (pictured on Saturday) will visit Kenosha on Tuesday to ‘meet with law enforcement and survey damage from recent riots’, the White House said

‘He’s reached to the Blake family. I don’t know if they were able to connect yet. And I don’t know for sure if that’s on the agenda,’ Lara Trump said during her interview with Fox News. ‘I’m sure, given the opportunity, he’ll be more than happy to do that. But I haven’t gotten that information just yet.’

News of Trump’s Kenosha visit drew criticism from Democrats who say it would likely incite more violence in the city.

Wisconsin Lieutenant Governor Mandela Barnes, a Democrat, called for Trump to cancel the trip on Sunday.

‘So I don’t know how, given any of the previous statements that the president made, that he intends to come here to be helpful, and we absolutely don’t need that right now.’

‘His visit has one purpose and one purpose only, and that is to agitate things,’ the Democrat told CNN’s State of the Union.

‘We’re 66 days from an election and I think it’s a tragedy that we have a president that is doing everything he can to fan the flames.’

Democratic presidential nominee Joe Biden is also set to travel to an undisclosed location on Monday to ‘condemn violence, and to note that chaos has unfolded’ on Trump’s watch, the New York Times reported.

While detail’s of Biden’s travel plans are not yet known, some have speculated that he could also be headed to Kenosha.

The report came as Biden spoke to the National Guard Association of America in a virtual meeting on Saturday.

‘You’ve been called out to help keep the peace as the country continues to struggle and overcome our racial justice crisis,’ the former vice president said, noting the National Guard had been deployed to Kenosha.

Biden also took aim at Trump, saying: ‘I promise you, as president, I’ll never put you in the middle of politics or personal vendettas. I’ll never use the military as a prop or as a private militia to violate rights of fellow citizens. That’s not law and order. You don’t deserve that.’

Monday’s trip could be a sign that the Biden campaign is worried about losing ground on the issue of law and order by embracing the Black Lives Matter movement. 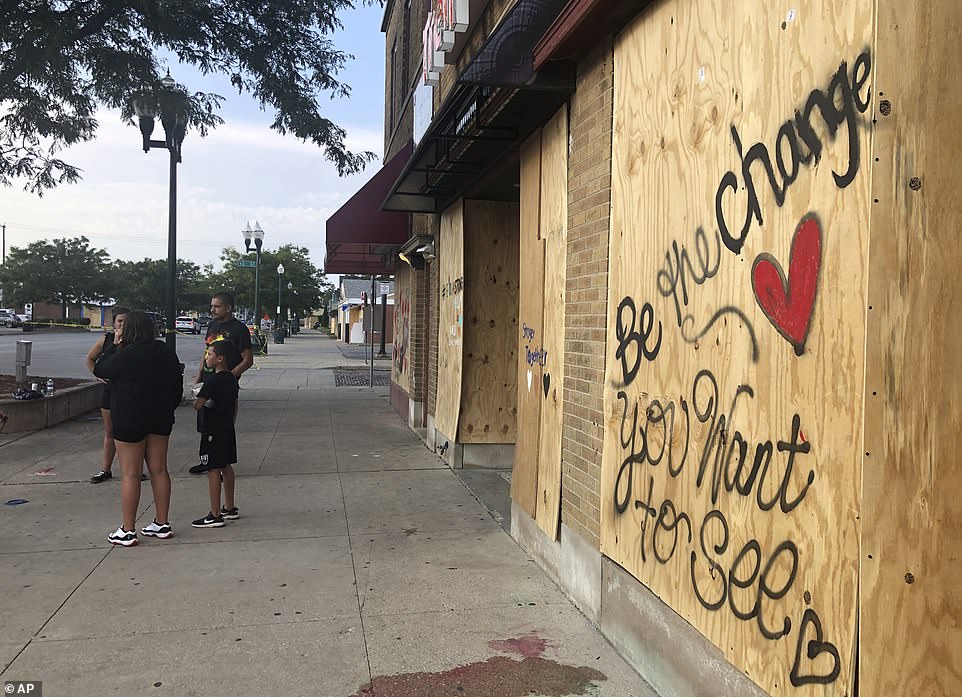 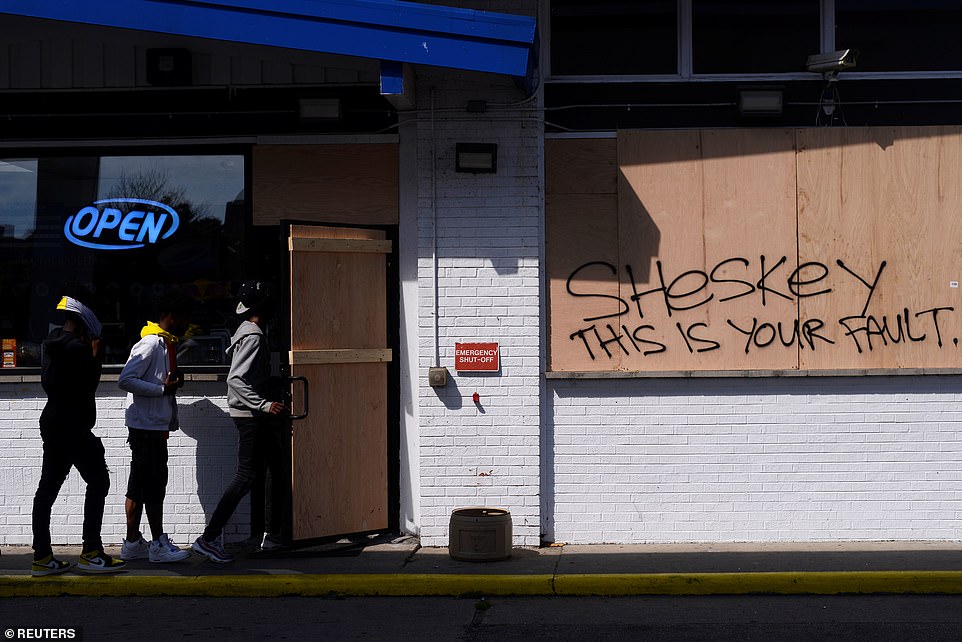 People enter a shop near graffiti making a reference to Rusten Sheskey, the police officer who fired seven shots point-blank into Jacob Blake’s back, in Kenosha on Thursday 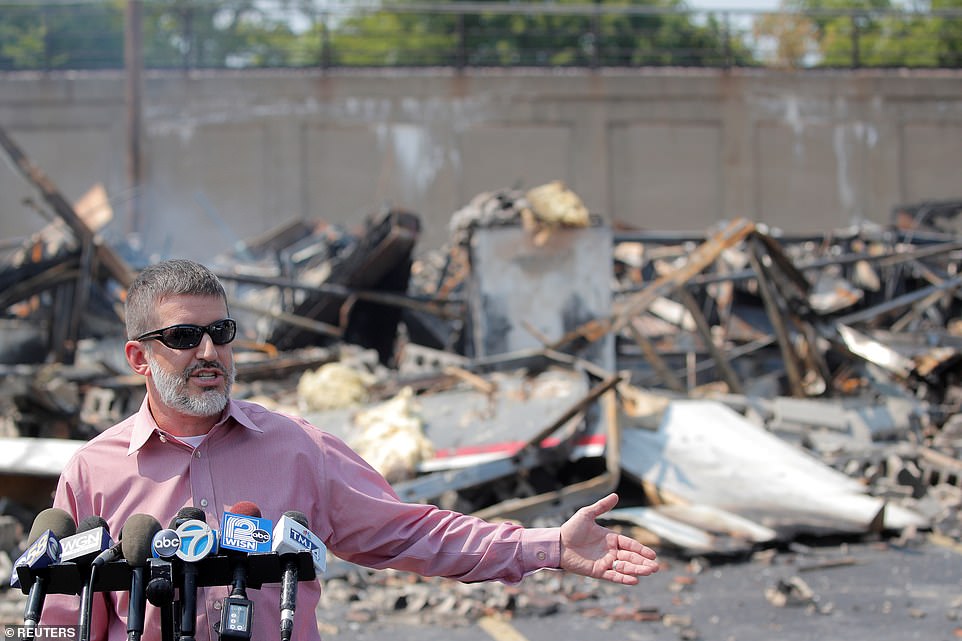 In Kenosha, residents are largely in agreement that the violence could push people to vote for Trump if they believe that he is the best person to save their city and others experiencing similar unrest.

‘We have three hundred federal law enforcement officers in town now, with another thousand federal troops on the way,’ Nelson, the bar owner, said of the National Guard troops’ arrival.

‘Somebody’s got to end this, and it isn’t going to be the local government. It’s the president.’

Sarah Gorman, an aviation loadmaster, likewise said that the riots will influence the election. Asked if they could push people to vote for Trump, Gorman said: ‘It’s a giant concern I have.

‘But maybe it could also push us towards someone who can act coherently.’

Gorman spoke to the Times while she painted a mural outside the Robin’s Nest Cakery downtown.

‘I’m ashamed of what people have to do to assert their rights,’ she said of the protesters. ‘I’m sorry that they have to burn buildings but nobody’s listening.’ Controversy: Legislator Samuel García causes outrage on social networks by pointing out that he knows Mexicans who earn $ 2,500 a month “and are happy” | The State Merengue on the rise: Karim Benzema decided a great game and gave Real Madrid the victory | The State