Imperial College London experts compared the hip bones of dead people who had donated their bones for science.

They found those who had never once broken a bone had more flexible collagen and mineral structures, which are the building blocks of bones.

Their bones were more able to flex and absorb the shock of falls than people who had stiffer bones which snapped more easily, scientists say.

Some of the donors with hip fractures were taking drugs called bisphosphonates for osteoporosis, which causes bones to deteriorate and become extremely fragile.

The drugs, including Fosamax, Binosto and Pamidronate, slow the speed at which bone degrades to slash the risk of fractures.

But donors who had been taking bisphosphonates for between one and 13 years had lower tissue strength and flexibility than those who had not.

Academics led by Dr Shaocheng Ma admitted they were surprised by the finding, which was published in the journal Scientific Reports.

It suggests that although bisphosphonates retain bone density, the benefits may be offset by a reduction in flexibility, which makes bones more likely to break. 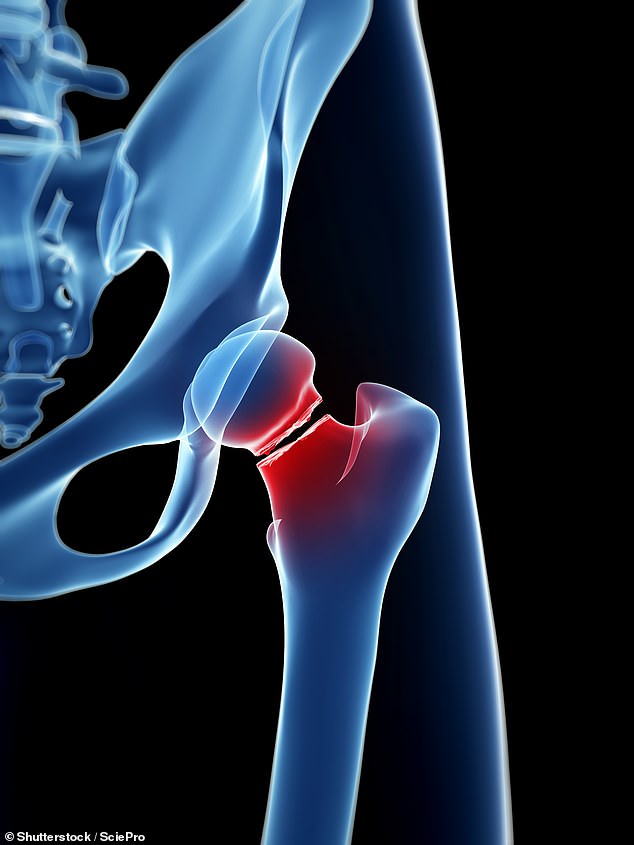 Older people’s risk of broken bones could depend on whether their bones are flexible – and a common osteoporosis drug may be causing stiffness, Imperial researchers found (stock image of hip fracture)

Figure show around 3million people in the UK, 10million in the US and 200million worldwide live with osteoporosis.

The condition, often caused by hormone imbalances, makes bones deteriorate from the inside out and makes them much more likely to fracture.

The NHS claims patients can suffer a broken rib simply from coughing or sneezing. Broken wrists are the most common injury.

Doctors usually diagnose the condition using bone density scans, but some people whose bones appear normal on these scans are still unusually prone to breaks.

This is because several other factors – such as age or whether they have broken the bone before – are as important as bone density.

To find out more, the researchers at Imperial looked to the building blocks of bones – stiff minerals surrounding flexible collagen fibrils.

Donors who had never broken their bones were more likely to have flexible collagen and minerals, compared to those who had suffered fractures.

WHAT TREATMENTS ARE THERE FOR OSTEOPOROSIS?

A number of different medicines are used to treat osteoporosis.

Bisphosphonates slow the rate that bone is broken down. This maintains bone density and reduces the risk of a broken bone.

There are a number of different bisphosphonates, including:

They’re given as a tablet or injection.

Osteoporosis is a disease where bone density is lost leaving patients prone to fractures. Usually, old bone tissue is broken down and replaced with new tissue.

Osteoporosis occurs when the breaking down of bone outpaces its replacement.

Bisphosphonates are clinically proven to reduce the risk of fractures by increasing bone mass and mineral density as well as filling pits created by overactive bone cells.

The drugs bind to the surface of bones, blocking bone removal.

Because longer-term treatment can sometimes have side-effects, the doctor may suggest a break from treatment after three to five years.

In those who had broken their bones – whether they took medications or not – the mineral broke away from the collagen much faster when force was applied to the bones.

The bones may have fractured because the tissue was too inflexible and could not deform to absorb energy during a bump or fall, the researchers said.

Dr Ulrich Hansen said: ‘We tend to think of our bones as solid, hard support structures, but flexibility appears to be extremely important in bone health.

‘If bones are too hard, they are less able to absorb impact and more likely to break.

‘Our study suggests flexibility could be just as important as density in preventing fractures.’

The findings suggest doctors should look not only at bone density, but also bone flexibility, when deciding how to prevent bone breakages.

Donors who were given bisphosphonates had the lowest tissue strength and flexibility, but the study did not say specifically which drugs the patients had been taking.

‘Perhaps after a long period of treatment in some patients, there is a loss of flexibility that offsets some of the strength benefits from increases in bone density.

‘More research is needed to determine exactly why this is and how this could affect clinical practice in long-term users.’

In some bisphosphonate users, the drug may bind itself to and harden minerals that are important for bone flexibility, the researchers said.

However, the findings could also be a result of the patients’ bones being significantly more osteoporotic in the first place.

Lead author Dr Shaocheng Ma said: ‘It’s possible that the amount of mineral strain is key in setting off the fracture process.

‘However, in patients who have taken bisphosphonates for a long time the mineral could become too stiff, causing it to break away from the collagen.

‘This releases the collagen and allows it to stretch uncontrollably, which then results in a fracture.’

The researchers say that people who are taking bisphosphonates should continue to follow the advice of their doctors.