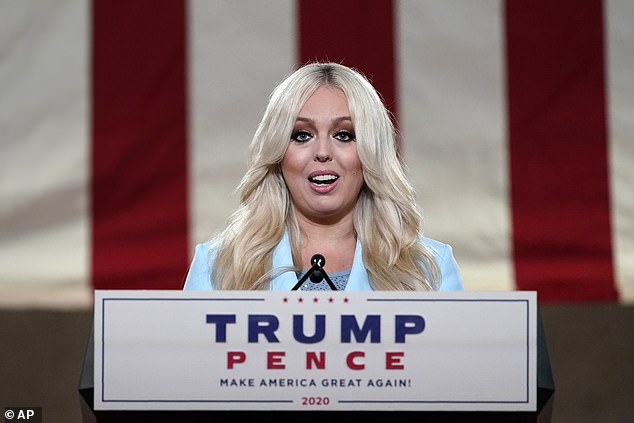 First daughter Tiffany Trump made a rare appearance Tuesday night at the Republican National Convention and railed against the media, the tech giants and the education system suggesting they keep the American people ‘mentally enslaved.’

‘People must recognize that our thoughts, opinions, and even the choice of who we vote for are being manipulated and invisibly coerced by the media and tech giants,’ the 26-year-old Georgetown Law Center graduate said.

She said that in the academic arena, students with opposing viewpoints are ‘too afraid to speak,’ while the system promotes ‘groupthink.’ 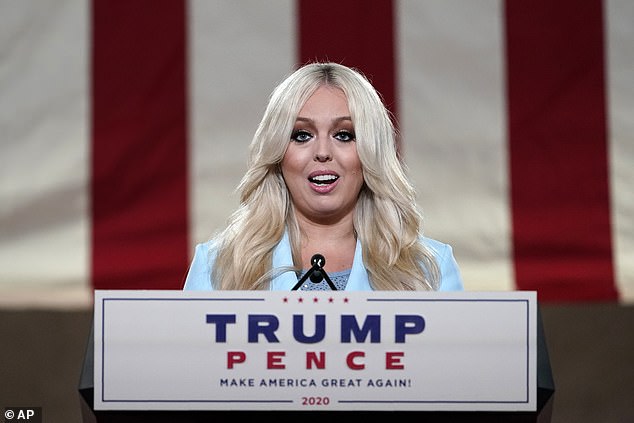 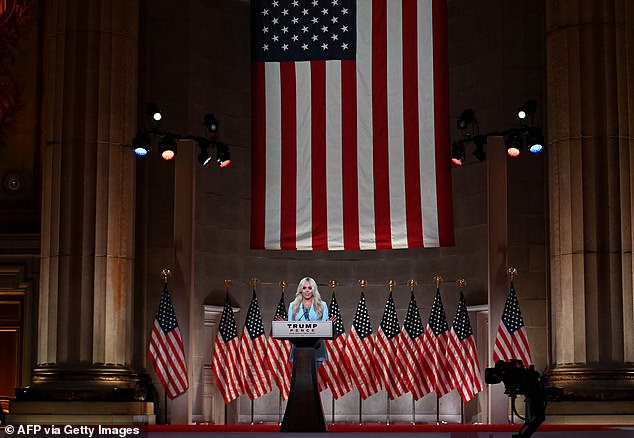 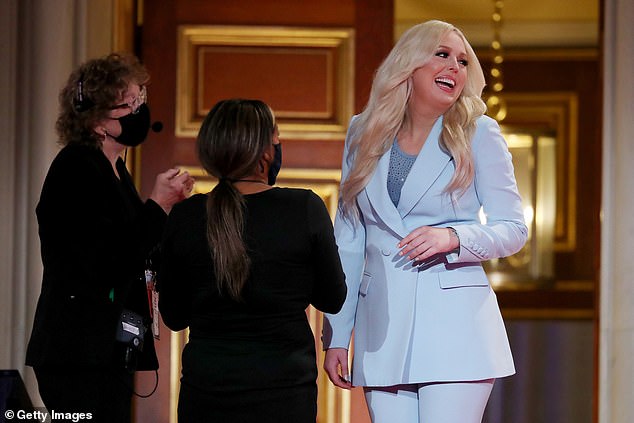 Tiffany Trump prepares to record her per-recorded remarks, which were part of Tuesday’s RNC program

The speech was much more mature than what the recent college graduate delivered four years ago in Cleveland, as she gushed about the notes the now-president would write on her report cards.

‘Some dating back to kindergarten,’ she said. ‘Because I like to look back and see the sweet notes he wrote on each and every one of them.’

She added that President Donald Trump ‘has never done anything halfway – least of all as a parent.’

This year’s speech was likely meant to be a wake-up call to fellow millennials.

‘As a recent graduate, I can relate to so many of you who might be looking for a job. My father built a thriving economy once, and believe me, he will do it again,’ she said.

‘This election I urge each and every one of you to transcend political boundaries,’ she continued, adding, ‘I urge you to make your judgement based on results and not rhetoric.’

While not saying it specifically, she placed the blame of her father unpopularity among some segments of the population – including many of her peers – squarely on the media.

‘Rather than allowing Americans the right to form our own beliefs, this misinformation system keeps people mentally enslaved to the ideas they deem correct,’ she said. ‘This has fostered unnecessary fear and divisiveness amongst us.’

‘Why are so many in the media, in technology, even in our own government, so invested in promoting a biased and fabricated view?’ she continued. ‘Ask yourselves why are we prevented from seeing certain information? Why is one viewpoint promoted while others are hidden?’

‘The answer is control – and because division and controversy breeds profit,’ she said.

Tiffany Trump said the ‘uncensored truth’ about what Trump supporters believe include equality of opportunity, freedom of thought and expression and also school choice.

Echoing similar comments she made four years ago on the RNC stage she added, ‘My father does not run away from challenges – even in the face of outright hatred.’

Tiffany Trump then took on masks – but not the ones to be used to prevent the spread of COVID-19.

‘I encourage you to see beyond the facade that so many other politicians employ, they mask themselves in disguises of decency as they try to pressure us to mask our own identities and beliefs,’ she said.

‘My father is the only person to challenge the establishment, the entrenched bureaucracy, big pharma, and media monopolies to ensure that American’s constitutional freedoms are upheld, and that justice and truth prevail,’ she touted. Gabriela Spanic reveals that she has COVID-19 | The State