Jenna Bush Hager is mourning the loss of her father-in-law, former Lt. Gov. John H. Hager, who died on Sunday morning at the age of 83.

The 38-year-old Today host paid tribute to her husband Henry Hager’s late father on Instagram, sharing heartwarming photos of him and his wife Margaret Hager with their grandchildren, including her daughters Mila, seven, and Poppy, five, and son Hal, one.

‘We lost my father-in-law, John Hager, Sunday morning. He was a giant of a man—although, I never saw him stand. He lived with polio—paralyzed from the waist down—in a wheel chair, for forty five years,’ she wrote. 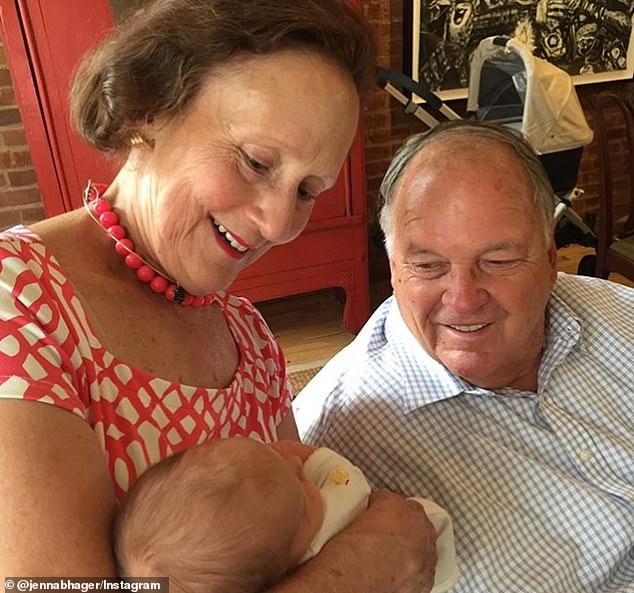 Loss: Jenna Bush Hager is mourning her father-in-law John Hager, who died on Sunday at the age of 83. He’s pictured with his wife Margaret Hager and one of their grandchildren 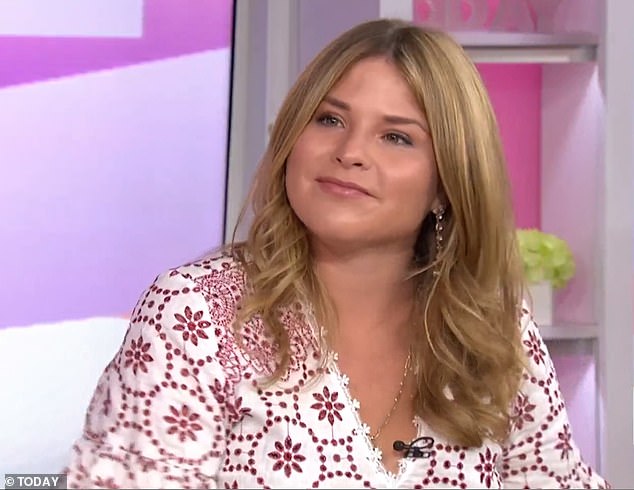 Staying positive: Jenna opened up about her late father-in-law on the Today show on Monday, telling her co-host Hoda Kotb: ‘I feel so lucky that he was mine’

‘Despite it all he lived life to the fullest—and was compassionate, curious and kind. And boy, will we miss him but as Poppy said: he is in a better place—”in heaven, out of his wheel-chair and running.”‘

In the first photo, Jenna’s father-in-law is looking lovingly at a baby being held by his wife. The newborn is presumably Jenna’s son Hal, the couple’s first grandson, who was born in August 2019.

The next image in the series shows the Hagers with all five of their granddaughters, while the last picture in the tribute is a snapshot of Jenna’s in-laws with Mila and Poppy.

The proud daughter-in-law also posted a sweet photo of her daughters with their paternal grandfather on her Instagram Stories.

The cause of death has not yet been revealed. 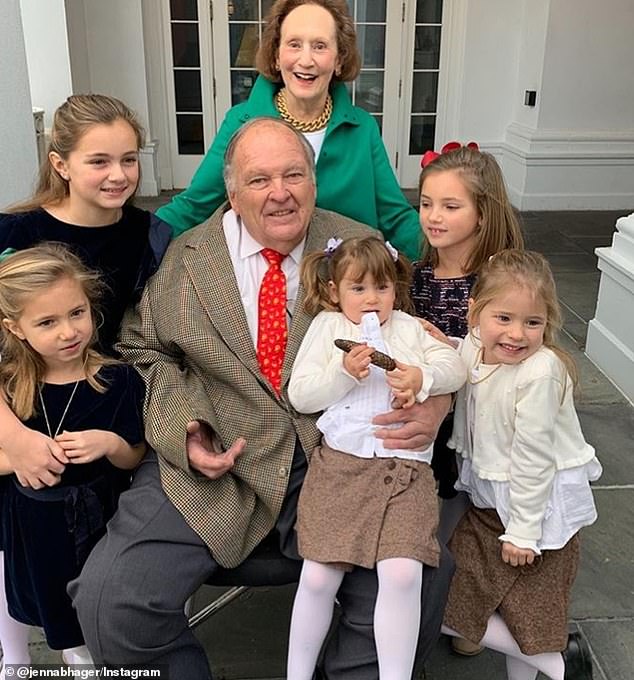 Grandpa: Jenna paid tribute to her husband Henry Hager’s father on Instagram, sharing photos of him and Margaret with their grandchildren, including her daughters Mila and Poppy 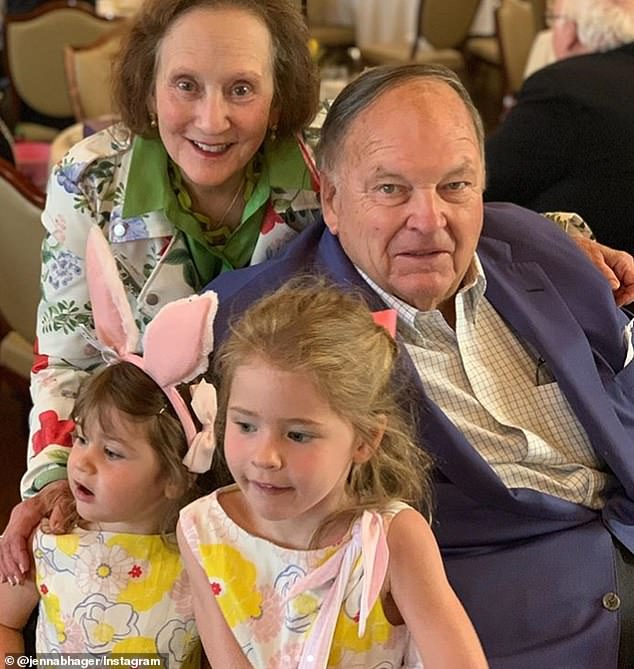 So sweet: Jenna’s father-in-law was in a wheelchair for 45 year after battling polio, and her daughter Poppy said that ‘he’s running in heaven’ 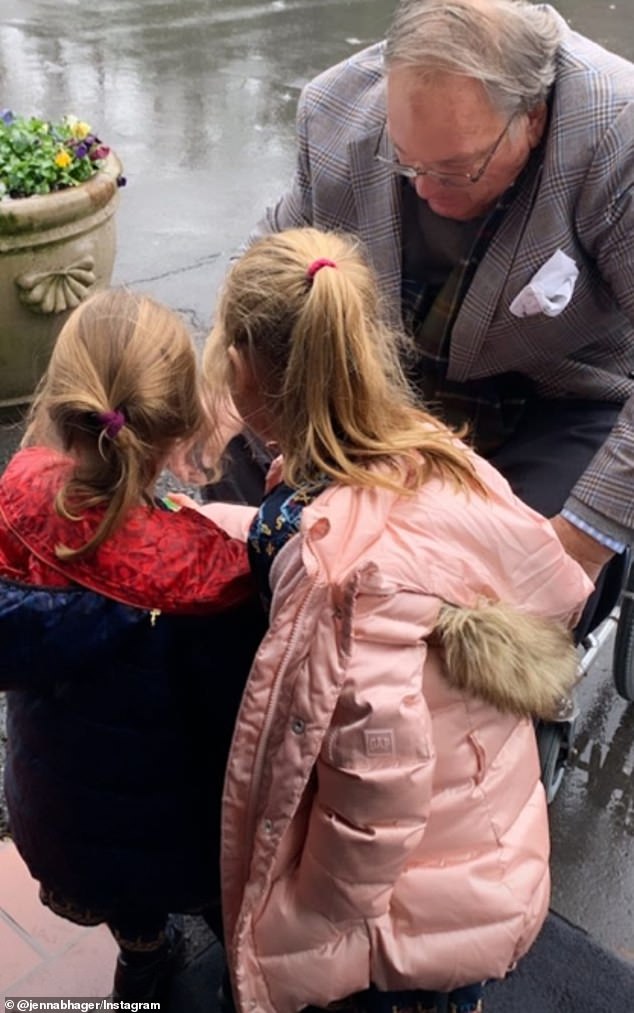 Looking back: ‘He always played with the kids,’ Jenna said. ‘He was on their level, he was down, and his nickname, his name as a grandpa, was Bumpy, and he was beloved’

Jenna was close to tears as she opened up about her late father-in-law on the Today show on Monday morning, after her co-host Hoda Kotb praised her for putting a ‘brave face on’ at work following her family’s loss.

‘We lost my beloved father-in-law, I feel so lucky that he was mine,’ she said. ‘He was diagnosed with polio 45 years ago, but he never let it stop him.’

She recalled how he had participated in 13 marathons in his wheelchair.

‘He always played with the kids,’ she added. ‘He was on their level, he was down, and his nickname, his name as a grandpa, was Bumpy, and he was beloved.’

The Army veteran was the lieutenant governor of Virginia from 1998 to 2002. He later served as assistant secretary in the U.S. Department of Education under Jenna’s father, President George W. Bush. 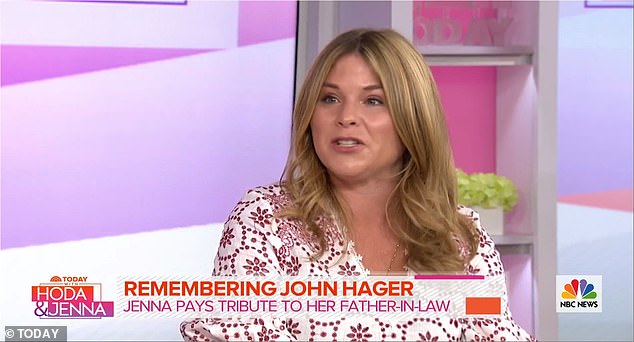 Family: Jenna’s father-in-law was the lieutenant governor of Virginia from 1998 to 2002. He served in the U.S. Department of Education under her father, President George W. Bush 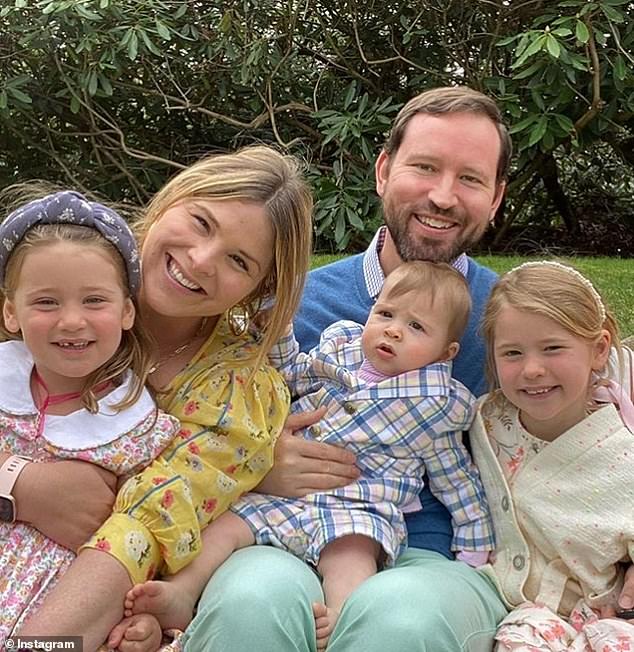 Next generation: Jenna and Henry have three children: Mila, seven, Poppy, five, and Hal, one. Hal was the Hagers’ first grandson

Virginia Gov. Ralph Northam said in a statement that ‘John Hager devoted his life to public service, and I admired his love for our country and for Virginia.’

The governor ordered Virginia state flags to be flown at half staff for 10 days in his honor, which Jenna noted on the Today show.

‘The flags in Virginia are half-mast for him because he was the first lieutenant governor in a wheelchair, so he just defied all expectations,’ she said. ‘But more than that, he was a beloved husband and father and father-in-law and grandfather, and he will be so missed.’

Jenna also touched upon the added heartbreak of losing a loved one amid the coronavirus pandemic.

‘For any of you all who have lost somebody during this time, I empathize with you. Or if you have ailing or sick parents or grandparents, it’s a hard time,’ she said. ‘But I think what we can do is remember how precious these people are. We lost him, but he is still with us. 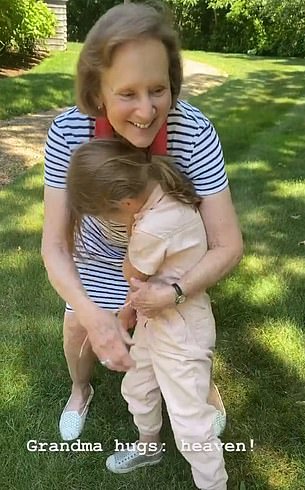 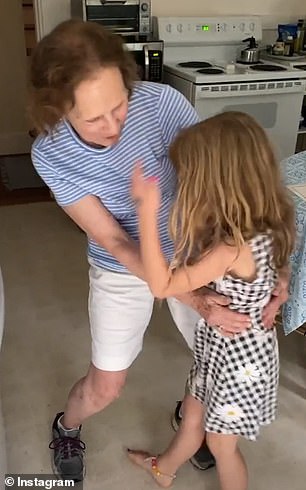 Last visit: Jenna, Henry, and their children visited his parents for the first time since the start of the pandemic in June, after spending months quarantined in their Long Island cottage

‘Poppy said the most beautiful thing. She said: “Well, mom, now he’s out of that wheelchair, and he’s running in heaven,”‘ she added. ‘He got to meet our little baby Hal, his first grandboy. He has five granddaughters, and so now, he has little Hal too.

‘But he is loved, and I’m thinking about my mother-in-law and his two boys, Jack and Henry, and my sister-in-law.’

Jenna, Henry, and their children visited her in-laws for the first time since the start of the pandemic in June, after spending months quarantined in their Long Island cottage.

‘We have been in the same location for months, and we haven’t really seen anybody But for the first time, we got to see my in-laws, my mother-in-law Maggie, and I wanted to weep,’ she said at the time.

‘We drove down, and just the way [my children’s] faces lit up, the way her face lit up, reminded me what life is all about.’ Tempting: Snack in 10 minutes of sausage, potato and beer | The NY Journal