The love child of Belgium’s former King Albert II has revealed why she outed the royal as her father, insisting she would have done so regardless of his status.

Artist Delphine Boel, 52, won a seven-year legal battle in January, which resulted in Albert, 86, admitting he was her biological father after submitting to a court-ordered DNA test last year.

The revelation confirms her as the half-sister of King Philippe, 60, and Queen Mathilde, 47, and puts her 15th-in-line to the Belgian throne. She’s also entitled to a share of Albert’s estate when he dies.

Delphine is thought to be the result of an 18-year affair Albert – who abdicated in 2013 – had with Belgian aristocrat Sybille de Selys Longchamps.

In an interview with The Sunday Times, Delphine spoke of her relief that she’s finally being ‘taken seriously’ – adding that her children, aged 12 and 16, had become accustomed to being asked if their mother was ‘right in the head’ for claiming to be one of the royals.

She insisted her battle was not born out of a desire to be ‘elevated’ in society, and claimed she would have still gone to court to prove her father’s paternity if he was a ‘zookeeper or a criminal’.

Delphine was already an aristocrat prior to her claims and told the publication she had no intention to financially benefit from Albert being her father.

She pointed out her mother’s former husband, steel magnate Jacques Boël, 91, whose family fortune is estimated to be around £1.4 billion, is ‘far wealthier’ than the royal family, and Delphine claimed she would often run in the same circles as British royalty growing up.

Sybille and Albert’s affair is believed to have begun in 1966 when Albert was not yet king, but was married to Italian aristocrat Donna Paola Ruffo di Calabria, whom he wed in 1959.

Delphine (left with her mother in 2000) is thought to be the result of an 18-year affair Albert had with Belgian aristocrat Sybille de Selys Longchamps, pictured

The couple lived apart for a large part of their early marriage, amid rumours that she disliked living in Belgium, finding it too cold and rainy.

Delphine was born in 1968, and the affair between her parents is thought to have ended in 1984.

Speaking to the Sunday Times, Delphine said Albert was ‘absolutely present’ in her life for years when she was young, even after she moved to London with her mother who married into the wealthy English Cayzers family after divorcing Jacques Boël.

She recalled: ‘It’s not that I was always sitting on his knees going googoo gaga dada. But he was available. I could call him whenever I wanted.’

Albert is thought to have started an affair with Baroness Longchamps in 1966 (pictured in 1965), before he became king but after he got married

Albert ascended the throne in 1993, following the death of his elder brother, King Baudouin, from heart failure.

Delphine said she remained in contact with him, via phone calls, and received gifts on her birthday, until he cut off contact shortly after the publication of an unofficial biography of Queen Paola which alluded to an affair the king had which produced a lovechild.

Albert acknowledged problems with his marriage in his Christmas speech the same year, referring to a ‘crisis’ which nearly ended his marriage 30 years before, but said he and his wife ‘surpassed those difficulties to find a deep understanding love’.

But Albert never addressed the issue of a child, and for years the palace neither confirmed nor denied the reports, merely saying that it was a ‘private matter’.

For years Albert lived apart from his wife, Italian aristocrat Donna Paola Ruffo di Calabria (pictured together in 1965 in Italy), who is thought to have disliked being in Belgium

Delphine’s quest to expose the true identity of her father didn’t always make her popular in Belgium.

‘Some people thought I was a nuisance or ridiculous,’ she said. ‘Now, at last, I’m being taken seriously.’

Despite years of private lobbying, Delphine was unable to get Albert to recognise her true identity.

In 2005 she claimed she called the palace to try to get help for her mother who was being harassed by journalists. She said she spoke to Albert, who told her: ‘You are not my daughter.’

Albert (right) has alluded to problems with his marriage to Paola, former Queen of Belgium, in the past but has refused to admit Ms Boel is his daughter until now

Delphine claims that questions over her lineage led to her and her mother being put on a ‘high risk’ list by financial institutions, which led to Royal Bank of Scotland abruptly closing both of their bank accounts in 2012.

She said her then 11-year-old son was also put on the register, limiting his access to financial institutions.

Delphine was told she would have to publicly denounce claims that Albert was her father in order to have their names removed.

In 2013, she filed a lawsuit against King Albert in which she demanded he publicly recognise her as his daughter.

Ms Boel is pictured alongside her husband, American James O’Hare, in Brussels in 2008. The pair will now be entitled to a share of Albert II’s estate when he dies

After several early setbacks, the breakthrough for Delphine came in November last year when a court ruled that Albert must provide a DNA sample for testing. Failure to comply would result in a €5,000 fine for each day the sample was missing.

Albert is thought to have undergone the DNA test shortly afterwards, which proved he is Delphine’s father. The royal then issued a statement confirming the paternity in January.

Despite the admission, Delphine said she doesn’t hold out much hope that she’ll reunite with her paternal father and fears she’ll never get to ask him why he disowned her face-to-face.

She added: ‘If he had told me and there was a good reason for it, everything would have been settled.’ The cover of TIME that many will agree with: 2020 is the worst year in history that you will not want to return to | The State 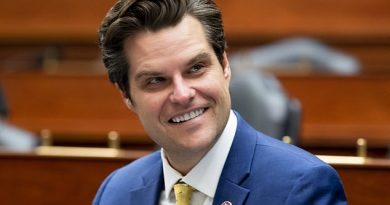