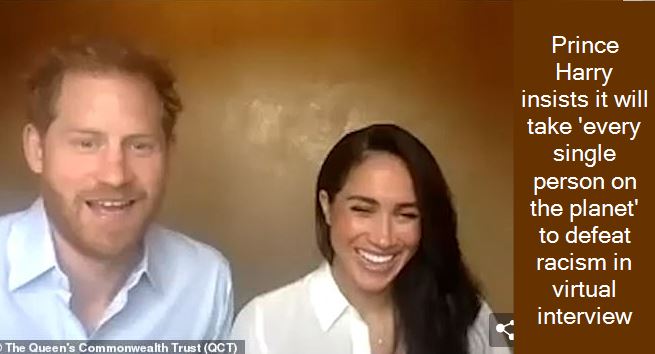 The Duke of Sussex insists it would take ‘every single person on the planet’ to defeat racism in a candid new virtual interview for a civil rights organisation.

Prince Harry, 35, who is currently living in Tyler Perry’s $14 million mansion in Beverly Hills with Meghan Markle, 38, and their son Archie, one, having stepped back from royal duty in March, is set to speak about the topic in a new interview for the Colour of Change initiative.

In a clip released of the interview on Instagram, Prince Harry praised the younger generation for ‘acting, rather than just saying’.

The clip of the interview was shared over the weekend online, with the caption seemingly including a quote from Prince Harry: ”“Inequality is not unfortunate like a car accident, it has been manufactured”.

The caption continued: ‘Prince Harry and @iamrashadrobinson talked candidly about systemic racism, hate online and people with privilege, using their privilege for change.

‘Here’s a sneak peek at what happened. Stay tuned for the full convo #ComingSoon!’

In the clip, Rashard said: ‘Part of this work, part of this moment that we’re in, is that making sure from analysis to action that we drive action toward structural and systemic change. Changing the rules that have held people back.’

Harry added: ‘You say this so beautifully Rashard, and it’s so true.

‘There’s so much that has happened for so long and once those problems exist, charity is crucial in so many ways but it can’t fix the problem. The problems already exist, and are too big.

‘As I’ve said to you before, it’s like bringing a bucket of water to a forest fire.

Meanwhile he went on to praise the younger generation for ‘leading the movement’.

He said: ‘To be led by the younger generation and to act rather than just say, it’s like okay so you’ve said it and now you’ve got to follow through with it.’

According to authors Omid Scobie and Carolyn Durand, Meghan has played a pivotal role in helping her husband become more attuned to racism.

Speaking to the National Public Radio in the United States, Mr Scobie said: ‘Harry’s journey to wokeness has been very public.

‘We’ve seen him learning and educating himself along the way, but this experience of witnessing Meghan face racist remarks and commentary would have been the first time he’d seen someone in his life or someone he was particularly close to affected by it in a certain way.

‘We talk about some of the more obvious examples in some of the media coverage but I think that the things that have flown under the radar are some of the othering of Meghan we’ve seen.

‘And I think there are things like that which Harry’s really had to become more attuned to and learn to see when it happens in front of him. And Meghan would have been the person that guided him on that journey. ‘

Who is Rashard Robinson?

He is the president of Color of Change, having joined the organization in May 2011.

The organization was founded after Hurricane Katrina and has a stated mission of strengthening political and cultural power for Black communities in America and making political and corporate leaders more responsive to the concerns of Black people.

Days ago, the royal wrote that social media was stoking a ‘crisis of hate,’ and urged companies to rethink their roles in advertising on digital platforms.

In an opinion piece for U.S. business magazine Fast Company headlined ‘Social media is dividing us. Together, we can redesign it,’ Harry said that social media, as it currently stands, is ‘unwell’.

‘The digital landscape is unwell and companies like yours have the chance to reconsider your role in funding and supporting online platforms that have contributed to, stoked, and created the conditions for a crisis of hate, a crisis of health, and a crisis of truth,’ he wrote.

He called for online communities to be ‘defined more by compassion than hate; by truth instead of misinformation; by equity and inclusiveness instead of injustice and fearmongering; by free, rather than weaponised, speech.’

Harry said he and Meghan started their social media reform campaign at the same time as the launch of the Stop Hate for Profit movement in June.

That campaign was launched by a coalition of non-profits who urged companies to stop advertising on Facebook until the Mark Zuckerberg-owned firm more effectively tackled hate speech on its platform.

Enlisting the support of more than 1,000 companies, the Stop Hate For Profit campaign ‘sent a $7 billion message through withheld ad dollars,’ Harry wrote.

Harry urged every social media platform to step up and take responsibility for creating new standards for hate speech, and to work more actively with consumers – not ad-buying corporations – to create a safe environment that isn’t cashing in on misinformation and hate.

It’s not the first time that Prince Harry has spoken out about these issues in recent months.

Last month, the royal faced criticism after he appeared to take a swipe at the British Empire by saying the history of the Commonwealth ‘must be acknowledged’, even if it’s ‘uncomfortable’.

The Duke made the comment as he joined wife Meghan for a video call with young leaders from the Queen’s Commonwealth Trust last month.

As part of the discussion on ‘justice and equal rights’, Harry said the Commonwealth needs to follow others who have ‘acknowledged the past’ and are ‘trying to right their wrongs’, and also admitted to having his own ‘unconscious bias’.

The intervention was criticised by Tory MP Andrew Rosindell, who told MailOnline Prince Harry’s comments were ‘disappointing’ and would not ‘please’ the Queen.

Meanwhile London-based veteran royal photographer Arthur Edwards said Harry criticising the one thing the Queen ‘cherishes above all things’ – which is preserving the Commonwealth – is an ‘insult’.

Writing in The Sun, he said: ‘Harry should stop listening to his wife, who is obviously filling him full of these ideas. She is evidently no fan of Her Majesty’s beloved Commonwealth.

It is the latest in a series of public steps taken by Harry and Meghan as they shift the focus of their royal work towards racial equality and social justice.

In June, Harry has also publicly apologised for ‘endemic’ institutionalised racism’, saying he is ‘sorry’ the world isn’t in the place where young people ‘deserve it to be’.

The statement sparked calls for Harry to apologise for his own mistakes relating to racism.

It comes after royal expert Katie Nicholl revealed how Prince Harry and Meghan, who have been ‘very busy’ focusing on the impact of COVID-19 on their charities, now plan to focus their energies on the Black Lives Matter movement.

Katie told Entertainment Tonight: ‘The Black Lives Matter movement matters to Meghan and it matters to Harry. And I understand that this is going to be an area where we’re going to see the couple doing a lot more work and taking a lot more interest.’

Katie said that Prince Harry and Meghan’s different backgrounds as an Englishman and a Californian gave them ‘different perspectives’ on the movement, and had helped them ‘keep abreast’ with what is happening on the ground in both countries.

According to the royal expert, Meghan in particular is ‘passionate’ about the movement and sees herself as ‘a role model’ who is able to speak on the issue of racial equality. 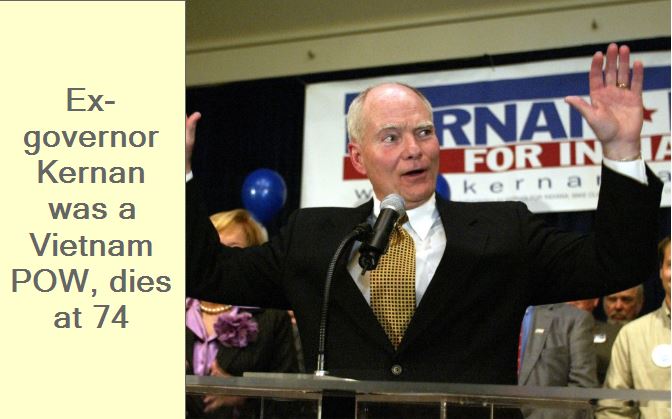 Ex-governor Kernan was a Vietnam POW, dies at 74 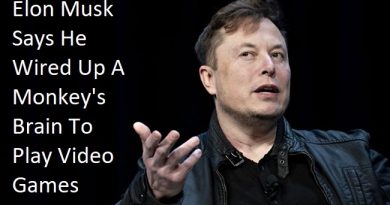