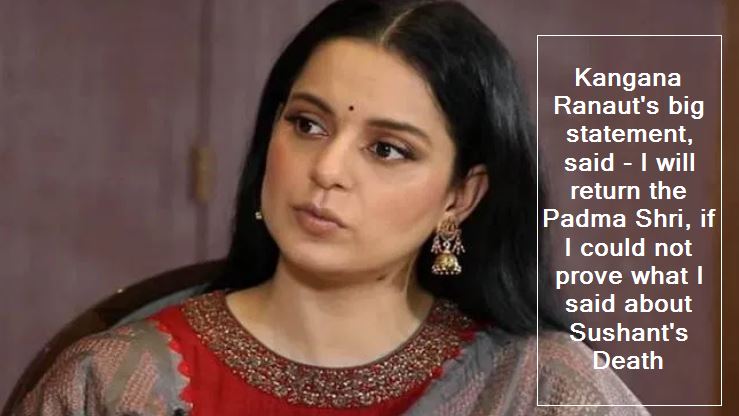 kangana ranaut on sushant singh rajput death: The death of actor Sushant Singh Rajput has sparked a trend of nepotism, favoritism and being a favorite of star kids in the Bollywood industry. Most stars have sidelined themselves with this issue. At the same time, fearless actress Kangana Ranaut has also once again spoken openly on this matter. He questioned the Bollywood gang why he did not accept Sushant’s work through his Instagram video.

Recently, in an interview with Republic TV, Kangana Ranaut spoke of returning her Padma Shri award. The actress said that she will return her Padma award if she is unable to prove her statements in the investigation related to Sushant’s demise.

Kangana revealed in her conversation that she was asked by an official in-charge in the Sushant case to come and record her statement. But he is in Manali, so he asked to send someone. Although the actress has not received any response from there at the moment.

The ‘Queen’ actress said, “They called me, and I told them that I am in Manali, you can send someone to take my statement, but I have not received any reply from there.” She further said, ‘I am telling you, if I have said anything, if I cannot prove it, and who is not in the public domain, I will return my Padma Shri.

Recently, Kangana Ranaut revealed in a conversation that she had come to know many secrets related to Sushant after a conversation with friend Kamal Jain. He also pointed to the disclosure of several names. But the condition is that if she is questioned, then she will speak openly. He said, “Everyone knows how they were bailed. If an investigation is done, I will talk about it openly because there is enough evidence in the media. Everyone knows that a gang was formed against them.”

Government officer befriends mother of a child on Facebook, then invited in hotel and sexually molested her Nawab Shah proposed to Pooja Batra in front of the parents, the actress shared throwback photos remembering that day