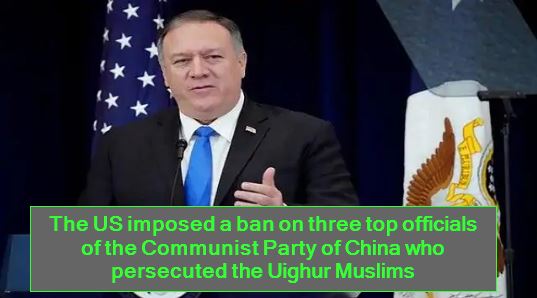 America has taken a big action against the ruling Communist Party of China. Three major Communist Party officials were banned for violating the human rights of Uygur Muslims, Kazakhs and other ethnic minorities in Muslim-majority Xinjiang province.

These officials associated with the ruling Communist Party of China include Chen Kuangu, Zhu Hyunun and Wang Mingshan. After the ban, these officers and their family members will no longer be able to enter the US. US Secretary of State Mike Pompeo said the United States is taking action against human rights violations in China’s Xinjiang province.

China has a large population of Uygar Muslims in the western part, but the dragon has been suppressing them for years. Many international human rights organizations have accused China of persecuting Uygar Muslim organizations. They are kept in detention camps, stripped of religious freedom and many restrictions are imposed.

“I am also imposing additional visa restrictions on other CCP officials, who are believed to be responsible for the injustice done to Uygar Muslims, Kazakhs and other minority communities,” Pompeo said. Family members will also come under the purview of this ban.

Pompeo said that China is violating the human rights of Uygar, Kazakh and other minority communities, they are forcibly enforced, collectively detained and forcibly enforced population control, their culture and Muslim America is no longer sitting quietly, trying to end faith.