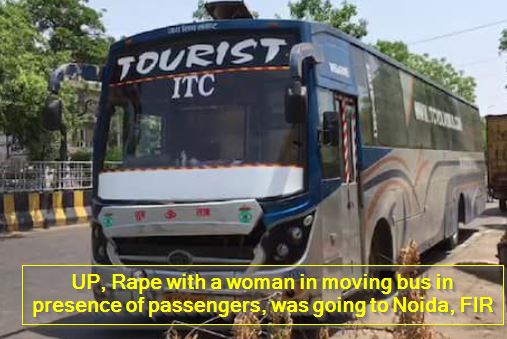 Noida. An incident of rape in a bus with a woman has occurred in Uttar Pradesh’s Noida. The driver and conductor of the bus, along with a woman coming to Noida with children from a private bus from Pratapgarh, have carried out the incident. After this, the driver escaped with the bus. On reaching Noida, the woman told her husband about the incident that happened to her. The husband complained to the Sector 20 Police Station. After this, the police has recovered the bus, one has been arrested and the police are filing a case and are talking about the investigation.

The victim told that the driver first gave her a sleeper seat. After this, he started asking for more money. The lady said that where you land me, my husband will meet there, he will give the money. After that, he took him to the back seat, and there was no one there. After this, the driver came after a while and started bullying me. He tied my hand and did the wrong thing. Also said that if I scream more, I will kill myself. I have two children, I was scared. I could not say anything. After this, the conductor and another boy said, take the money and finish it. Information given to the husband on the phone, the driver absconded after leaving the woman, after which the woman told her husband about the incident on the phone.

After this, he took me off the bus and at the same time my husband and another boy boarded the bus. I followed the bus in a rickshaw. The driver jumped from the moving bus in Sector 62. The victim said that she has come for the first time, she does not know where this incident happened with her. He told that there were 10 to 12 people in the bus.

In the case, DCP Women’s Safety Vrinda Shukla said that on Wednesday morning of 17 June, police had received information about the incident of rape in a moving bus. This incident is about the AC sleeper bus running at night, which was coming from Pratapgarh to Gautam Buddha Nagar. According to the information given by the victim, when the bus was on the way from Lucknow to Mathura, then during the night, this incident happened at night. On receipt of the information, a lawsuit has been filed immediately. One of the accused named in the FIR has been arrested, the bus has been seized. Teams have been sent to arrest the remaining named accused and the owner of the bus.

Medical examination of the victim is being conducted with the Medical Board. Also, statements are being made by finding co-passengers in the bus, so that the charge sheet is filed in the case at the earliest and the accused are punished. Three most beautiful women of the world formed anti corona brigade, will meet you here today