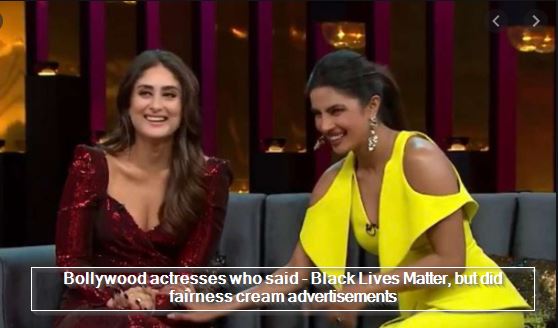 There are some stars who are seen standing in support of a black today, but once upon a time those stars themselves advocated a fair complexion by adding fairness cream. Know about Bollywood actresses who said Black Lives Matter, but did advertisements for Fairness Cream.

America, the world’s superpower, is fighting two wars simultaneously. On one hand there is a very bad situation with Corona, on the other hand, the situation has become worse due to the death of black George Floyd. Movements are taking place all over the country. Peace demonstrations are being seen in many places, there are many places where violent clashes have been seen.

But in the meantime #i cant breathe and #black life matter is quite trending on social media. The whole world is currently expressing its views through these two hashtags. The impact of this incident is also being seen in India. Many Bollywood stars are expressing their anger by using these two hashtags. But it is surprising that there are some of these stars who are seen standing in support of a black today, but in one time those stars themselves advocated fairness cream by adding fairness cream.

Let’s know about those Bollywood actresses who said Black Lives Matter, but did the advertisement of Fairness Cream-

Actress Kareena Kapoor Khan was seen doing the same thing. Kareena Kapoor also shared the post like Disha Patni, in which it was written – Every color is beautiful. In doing so, he raised his voice in support of George Floyd. But Kareena too has done many such advertisements where fairness has been given importance.

Nargis Fakhri is one of the actresses who have strongly supported this movement going on in America. Other celebs have calmed down by posting one, but Nargis is continuously raising her voice. He has shared several posts in support of George Floyd on social media. But the time is same with Nargis too, she is definitely opposing this today, but she herself has done many such advertisements where the meaning of beauty has been decided by the fairness.

Priyanka Chopra has also openly expressed her views on this issue. He expressed his pain by writing a long post. The actress wrote on one side – I can not breathe, then on the other side she expressed her anger on this incident. Now Priyanka Chopra was surrounded in the country for two issues. On one hand, he was also shown a mirror because he too has worked in Fairness Cream’s Aid. On the other hand, people expressed anger on why Priyanka has kept silence on the issues of the country.

Bollywood actress Alia Bhatt has also given her views on this controversy that broke out in America. He has also supported the campaign #black life matter. She did not write this post herself but has shared it, which shows that the actress also wants to associate herself with this campaign. But in fact Alia has also attended Fairness Cream Aid. He has also done one where color is given importance.