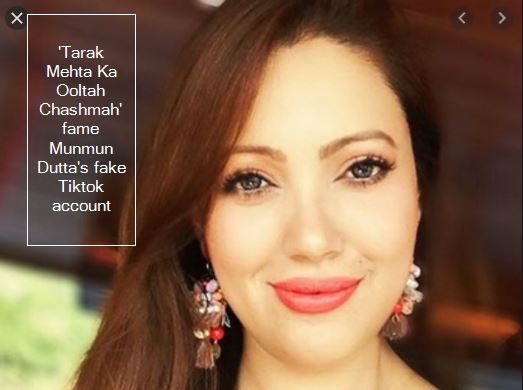 Actress Munmun Dutta, who got fame from her character Babita ji in the comedy TV serial ‘Taarak Mehta Ka Ooltah Chashmah’, has informed fans that all the tick talk accounts created in her name are fake. This news was shocking for the fans of Munmun Dutta. Munmun has told that many fake accounts are running on his name on Tick Talk.

Munmun Dutta has shared some screenshots on the Instagram story, in which he has expressed displeasure over the fake accounts created on Tick Talk. Munmun writes that all the accounts on Tick Talk are fake. Do not believe them and report them.

Shooting of all film and TV serials is closed due to lockdown across the country. In such a situation, even new episodes of ‘Taarak Mehta Ka Ooltah Chashma’ are not telecasting. All the celebs are spending time with family at their home. Fans are eagerly waiting when they will be able to re-enjoy their favorite comedy show. JEE-Advanced test for IITs to be held on July 3