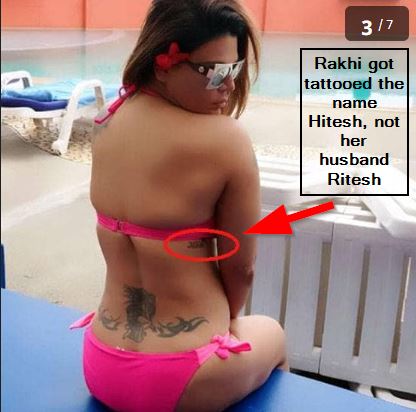 No matter how many trolls on social media or caught in controversies, Rakhi Sawant, but never retreats in sharing posts and videos on social media. Once again questions are being raised on one of his photos.

Rakhi Sawant continues to discuss her marriage. She announced her marriage through social media and told her husband name Ritesh. After this, he also told about getting a tattoo of husband’s name.

Now a photo of Rakhi has surfaced. There is a tattoo of husband’s name on his back but Hitesh’s name is written in it instead of husband Ritesh. Now who is Hitesh?

In such a situation, an entertainment portal contacted Rakhi and asked her the secret behind it. Rakhi said, ‘Hey, Ritesh is written. Half R has hidden me. So it seems that it is written H.

Please tell that a few days ago Rakhi Sawant shared the inside photos of her wedding. You could also see her husband Ritesh in one of these photos. But not just the face. Both were showing their wedding rings. Later this photo was deleted by Rakhi Sawant.

Apart from this, Rakhi shared many more photos, in which only she can be seen. There is another photo, in which he has caught Ritesh’s hand. But Riteish’s face was not seen in any of the photos. Hardik Pandya Speaks On Koffee With Karan Controversy, Says “Ball Was In Someone Else’s Court”