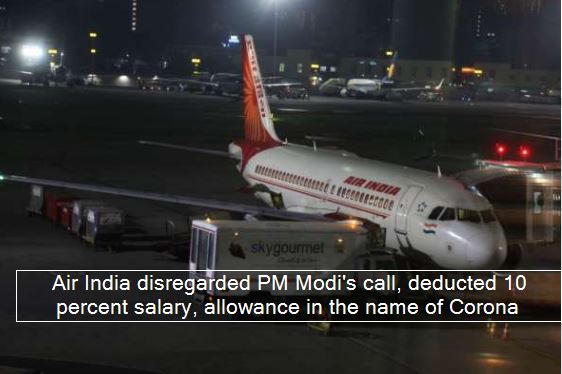 new Delhi. During the lockdown, an order of the government airline Air India has fallen like a thunderbolt on the common people and job people already in trouble. Air India has reduced the salary allowances of its employees by 10 percent. The salary for the month of March, transferred on April 20, has been reduced by 10 percent.

Although the airline called the deduction a Kovid-19 pay cut, the decision was taken by the CMD of Air India on 17 March and the order was issued on 20 March, 4 days before the nationwide lockdown was announced.

It has been written in the copy of the order that it has been decided that 10 per cent reduction in allowances of all employees except cabin crew is being made, this does not include basic pay, house rent allowance and variable DA. Employees are very angry with this decision of Air India.

The employees have written a letter to the airline management in this regard and warned that if the deducted salary is not paid within two days of the letter, then they will adopt legal route. NH Kapoor, general secretary of All India Service Engineers Association of Air India, said that the management had informed about the cuts, but we were assuming that they would consider the decision. He said that he opposes this decision.

He said, this decision of Air India also violates the appeal of Prime Minister Modi. The association cited industry rules and an order issued by the Ministry of Home Affairs, stating that the central government has asked all the employers not to take any pay cut under the Disaster Management Act, in which case Air India is unilateral to decide.

Trending: Kangana Ranaut On The Sets Of Thalaivi. See Pics