Irrfan Khan-starrer Angrezi Medium first look poster is now out. The trailer will release on February 13.

Irrfan Khan is all set to return to the big screens with Angrezi Medium. The actor, who was diagnosed with neuroendocrine tumour in 2018, announced the film’s trailer release date with a soul-stirring message.

In the video shared by Maddock Films, Irrfan says that he wanted to promote the film with full gusto but there are some ‘unwanted guests’ in his body with whom a ‘conversation’ is going on. The actor ensures his fans that they will be updated about his health and talks about the importance of being positive in life. The voice message concludes with Irrfan Khan saying “Enjoy the trailer and be kind to each other, and watch the film. And yes…wait for me.”

The trailer of Angrezi Medium will be unveiled tomorrow, February 13.

The official first look poster of the film has also been unveiled. It features Radhika Madan embracing Irrfan Khan as the actor stands with a smile on his face, dressed as a Queen’s Guard.

Check it out here:

Angrezi Medium has been directed by Homi Adajania and will hit the silver screens on March 20, 2020. 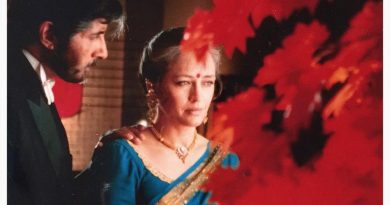 Radhika Madan explains why it is important to speak up for Rhea Chakraborty: ‘Justice is yet to be served’

Akshay Kumar posts sweet birthday message for daughter Nitara: ‘I love my baby girl more than I knew was possible’